In 1903, the English colonial minister offered a district for a Jewish settlement in Uganda to the Zionist leadership, whereby 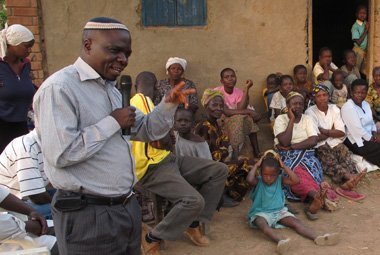 the English government brought to realization its efforts “to bring to pass the improvement of the Jewish race.” The 6th Zionist Congress (August 23-8, 1903) concerned itself with the English offer and decided to send an investigative commission to Uganda, but because of strong resistance inside the Zionist organization, the project was not followed up.
Later, individual Jews went to the two largest regions of the British East Africa zone, namely Kenya and Uganda. In Nairobi, the capital of Kenya, there is today, in 1935, a Jewish community of over 100 souls. Likewise there are Jews in the port city of Mombassa who are owners of great export companies. Since 1933 there has been an immigration of Jews from Germany to Kenya/Uganda. They have been warmly accepted as much in Nairobi and Mombassa as in Kampala, the capital of Uganda, and have been brought into various commercial enterprises.

Kenya is a land with rich soil, though with a tropical climate. In the districts, which at one time were offered to the Jews, the English have built huge farms, coffee plantations, which deliver a fine harvest. Coffee agriculture of course requires hefty investment. Wheat, barley, maize (corn), and hemp are also grown.

The Belgian Congo, which covers an area of about 2,382,000 sq. kilometers [Translator’s Note:  roughly 850,000 sq. miles] offers great economic advantages. It is rich in wood, India rubber, copper, and other minerals. It was originally an independent state, but has belonged since 1908 to Belgium. According to a census from 1923, 177 Jews live in the Belgian Congo. There is a Jewish community in Elisabethville.

[For our purposes, the only thing worth mentioning about Angola is Wischnitzer’s report that something called “the Angola Project” surfaced early in the 20th century. The Jewish Territorial Organization was created after the Zionist Congress of 1903 and met with the Portuguese government, which sponsored an expedition to Angola in order to ascertain the possibilities of creating settlements. The expedition brought back so few results that the Portuguese Senate first cut their budget; then WWI broke out, and that ended the project.
[Concerning South-West Africa, only Wischnitzer’s first paragraph would interest us:] South-West Africa, a German colony since 1884, was taken over by the Union of South Africa as a mandate after the Versailles Peace Treaty [of 1919]. It consists of a Jewish community of recently vintage in the capital city of Windhook, with its own rabbinate. Jews also live singly, scattered throughout the land. The possibilities of Jewish immigration have been recently considered.

The British Crown colonies of North and South Rhodesia lie between the Union of South Africa and the Belgian Congo and Tanganyika, and have Jewish settlements of recent vintage.
After Cecil Rhodes, from whom the colonies derive their name, a Jew from Hamburg named Alfred Breit traveled there, in order to open up economic possibilities. In 1931, out of a population of under 49,910 Whites, there lived 2,011 Jews, mainly in Bulawayo, in the capital of Salisbury, and in Gwelo. Individual Jewish pioneers had already been there previously. Some 426 Jews live in North Rhodesia. [Rhodesia is today’s Zimbabwe.] There is a Jewish community in Livingstone, the seat of the colonial administration.

At the moment, economic prospects are restricted. According to reports, the outlook is that opportunities beckon for immigrants who are interested in operating factories that produce chemicals, drugs, food products, etc.

Immigration of Jews from Germany is on a slow track.

Since 1910 the Union of South Africa has been a dominion in the British Empire, and consists of four provinces: the Cape of Good Hope, Natal, the Orange Free State, and Transvaal. On a surface of about 1,234,000 sq. kilometers [about 450,000 sq. miles] lives a population of about 8,251,000 souls, 2 million of whom are White.
Jewish immigration set in at the beginning of the 19th century, and between 1830 and1930 consisted of about 70,000 souls, mainly pioneers from England and Germany. From England came Benjamin Norden, the first president of the Cape Town community, and also brothers who were named de Pass. They were ship owners in Cape Town and led the seal, whaling, and fishing industries. Daniel de Pass was one of the first sugar planters in Natal Province. Lionel Philipps, boss of the firm Eckstein & Co., was the president of the Johannesburg Chamber of the Mining Industry.

The Brothers Mosenthal founded the domestic wool industry, and operated both the mining industry and the breeding of ostriches. The great upswing of the diamond industry is linked with the name of the German Jew Alfred Breit who assisted Cecil Rhodes to an extraordinary degree in opening up the Transvaal and Rhodesia.

← Matisyahu on Shalom Sesame
The Dying Man and Brisket →