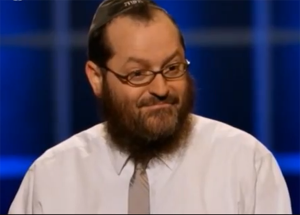 This one is a heart-warmer. A Rabbi, Moshe Weiss of St. Paul, Minnesota,  recently appeared on the Shark Tank introducing “SoundBender,” a simple but effective sound amplifying device for the iPad.

The entire presentation was both humorous and interesting, even more so for the Torah-observant Jew. Rabbi Weiss’ numbers reflected on interesting Gematriot. He asked for $54k in exchange of 26% of the company. 54 is 3 times 18 (chai). 26 is the gematria of the Tetragrammaton, the 4-letter name of Hashem.

He was also very straightforward, which is refreshing. When Barbara Corcoran offered him a royalty-based offer, he rejected it on the grounds of that it would be counterproductive to siphon off money from a business that’s trying to grow. “How will you get your money back? I will write you a check!” “Internet, shminternet.” Loved it!

Note: The video has been removed as it apparently infringes on copyright matters, necklace-blocking or not.

Tachlis-wise, he ended up getting a deal with Daymond John for $54k at 40%. Personally, if I had an iPad, I might want one of these as well. Yasher Koach Rabbi Weiss!