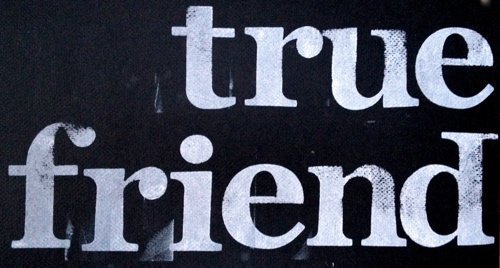 Rabbi Noah Weinberg zt”l tells of what he calls “A Jewish consciousness story.”

A gregarious son partying each night brags to his father that he can count 100 true friends. The father congratulates his son, noting that in all his life, he has only achieved half a friend. The father suggests a test. “Take a goat, slaughter it, put it into a sack, get some blood on you and in the middle of the night go to your friends,” the father says. “Tell them you got into a fight with a guy at the bar, one thing led to another and you killed him. Beg them to help.”

As so the son goes to each of those friends and all slam the door in his face. Dejected, he returns to his father and asks what the father’s half friend would do. His father tells him to go and see.
In the middle of the night, still holding the sack and covered in blood, the son knocks at his father’s friend’s home. He tells the same story. And the half-friend hesitates, saying, “Although I shouldn’t do this, you’re Chaim’s son, and I’ll help you.”
They take the sack and bury it together. He then hides Chaim’s son in his house overnight until the police pass through.
The boy returns to his father in shock.
The story continues and the father explains that a true friend would never even hesitate.

Note: this was tracked it down to an X-tian story from Gesta Romanorum, which was a Latin book of old stories, probably composed no earlier than the 14th century. There, the story, Tale 129, is as follows:

OF REAL FRIENDSHIP.
A certain king had an only son, whom he much loved. The young man was desirous of seeing the world and making friends for himself, and obtained his father’s permission to this end. After an absence of seven years,f he returned, and his father, overjoyed at his arrival, asked what friends he had acquired. ” Three,” said the son ; ” the first of whom I love more than myself; the second, equally with myself; and the third, little or nothing.” ” You say well,” returned the father; ” but it is a good thing to prove them before you stand in need of their assistance. Therefore kill a pig, put it into a sack, and go at night to the house of him whom you love best, and nay that you have accidentally killed a man, and if the body should bo found you will bo condemned to an ignominious death. Entreat him, if he ever loved you, to give his assistance in this extremity.” The son did so; and the friend answered, “Since you have rashly destroyed a man, you must pay the penalty: for if the body were found in my house I should very likely be crucified. Now, because you were my friend, I will go with you to the cross, and bestow upon you three or four ells of cloth, to wrap your body in when you are dead.” The youth, hearing this, went in much indignation to the second of his friends, and related the same story. He received him like the first, and said, ” Do you believe me mad, that I should expose myself to such peril ? But, since I have called you my friend, I will accompany you to the cross, and console you as much as possible upon the way. The prince then went to the third, and said, ” I am ashamed to address you, for I have never benefited you in any way: but, alas! I have accidentally slain a man, and must hide the body or perish.” ” My friend,” answered the other, “I will readily do what you wish, and take the crime on myself; and, should it be necessary, I will be crucified for your sake.” This man, therefore, proved that he was his friend.

The reference to crucifixion might make it a religious story, or else might make it just adapted to the language of the time.
But Gesta Romanorum takes this mashal and provides a very X-tian nimshal:

APPLICATION.
My beloved, the king is God; the only son is any X-tian. The first friend is the world ; and if it gives, in your necessity, two or three ells of cloth, it is much indeed. The second friend is your wife, and sons, and daughters; they will bewail you to your sepulchre, but soon forget you after you are laid there. The third friend is J.C., for whom we have done little, who loves us even upon the cross, and joyfully gave away His life for our preservation.

That said, there is a Jewish nimshal for this story, in which the first friend is your money, the second friend is your family, and the third friend is Torah and Mitzvot, which help argue your case and protect you in the next world.