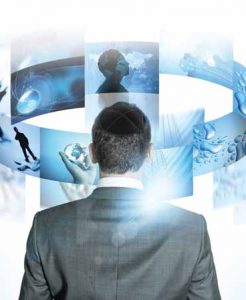 What is it that distinguishes mankind from the rest of the animal world? Most readers would respond that it is Man’s power of reason, or his ability to speak, or perhaps it is the fact that he has a soul that makes him unique.

These responses are consistent with the term Homo sapiens, which literally means wise human, often used to classify humanity. Other scientists have used different classificatory terms, such as Homo faber, a tool-using creature, or Homo ludens, a creature capable of play.

Certainly, from a Jewish perspective, the term Homo sapiens is the most acceptable of these terms. Our tradition puts a primary value upon our capacity to think. The breath of life that the Almighty instilled in us is defined by the Targum as the spirit of speech. We alone have the ability to speak. And of all God’s creatures, only Man has a rational soul.

The Torah does, however, recognize that aspect of humanity that invents and uses tools. In the opening chapters of Bereishit, we learn of Man’s creation of instruments of war (Bereishit 4:22), of agriculture (Bereishit 4:29 and Rashi), and of music (Bereishit 4:21). However, these expressions of creativity are not seen as definitive of man; they are objects of value through which he can extend his humanity.

Throughout history, technology (which can be defined as the use of tools) has helped man transcend his natural physical limitations. Tools have enabled him to broaden his horizons, and to conquer challenges that would otherwise be beyond him.

Rabbi Chaim of Zanz, the author of Divrei Chaim, who was both a Chassidic rebbe and a halachic authority, lived during the latter half of the nineteenth century. During this time, technology offered the Jewish world what was to some a boon, to others a bane: Engineers had devised a way to bake matzot by machine. What was once a slow and laborious process could now be done swiftly and effectively, and arguably more meticulously, from a religious perspective.

A great controversy ensued. Some encouraged the use of matzah-baking machine. Others, with less enthusiasm, merely permitted it. Still others quite vehemently opposed it. The Zanzer Rebbe was in the last camp, but he would not disclose the reasons for his opposition. He simply said, “I am against it for a secret reason, and I will keep it to myself. Mita’am kamus imadi.”

I heard from one of his distinguished descendants, the Klausenberger rebbe, Rabbi Yekusiel Yehuda Halberstam, that his ancestor was concerned that the machines would deprive the many impoverished women who depended upon matzah baking for their livelihoods. His concern was not purely halachic. He feared that this new invention would replace human beings.

In a similar vein, when Rabbi Aharon Kotler was a passenger in a car, he would instruct the driver not to go through automatic tollbooths, but to head toward the booth operated by a human being. He felt that the tollbooth operator would be distressed if he saw car after car opting for a machine over a human being.

Thus, more than a century ago rabbis were concerned with the dehumanizing effects of technology, with its potential to diminish Man’s sense of humanity.

How much greater their concern might be were they were alive today. The matzah-baking machine and the automatic tollbooth are primitive instruments indeed in comparison with contemporary devices.

Consider the progress made in the areas of robotics and artificial intelligence, as well as the creation of virtual reality. These new technologies have as their very objective the substitution of tools for human beings. Why depend upon the physical skills of a human being when a robot can do so much better? Why be satisfied with the limited intellectual capacity of flesh and blood when the power of artificial intelligence far exceeds that? Why suffer the challenges of human reality when virtual reality can suffice? Confronted with these advances, it is no wonder that, as I hear from my mental health colleagues, humans are beginning to feel worthless and expendable.

Ponder also the amazing progress that has been made in the field of genetic engineering, which enables not just the displacement of the human being, but also the determination of his gender, health, and even personality. The newfound ability to create “designer babies” foists upon us the possibility of an entirely new species of human, very different from the one we know.

The Internet not only extends our access to knowledge and the range of possible communication, but it has already begun to shape the ways in which we relate to one another. Aspects of human culture which were once typical, such as letter-writing and the reading of books, are rapidly becoming obsolete. The Internet’s ability to ruin reputations in an instant is an ominous threat to the integrity of the individual. Just as ominous is its ability to contaminate the souls of the innocent with images of violence and depravity.

The futurist Ray Kurzweil was on target when he noted that “the primary political and philosophical issue of this century will be the definition of who we are . . .” A startling example of the degree to which many contemporary thinkers have already lost the ability to comprehend the spiritual uniqueness of humanity is found in a book I read recently entitled The Soul of Cyberspace (New York, 1997). Author Jeff Zaleski tells of an interview he had with Rabbi Yosef Kazen, one of the pioneers of the Chabad web site. Zaleski asks about aspects of Judaism that are not transferable to cyberspace. Rabbi Kazen responds, “Well, you can’t have a minyan online . . .”

Zaleski finds this incomprehensible. He writes, “I fail to see why ten Jewish men cannot meet in a real-time chat room and thus constitute a minyan.” Rabbi Kazen struggles nobly to explain why this is just not possible. He speaks of the nature of the soul and of sparks of Godliness, but he cannot bridge the chasm between himself and the interviewer. He clings to the notion that essential humanity is necessary in prayer, which is only achieved by real, physical proximity. For the interviewer, the virtual presence of other human beings suffices to create a spiritual reality.

Emmanuel Levinas, the French philosopher, writes in Humanism of the Other, which is infused with Jewish sources, about the necessity of the “face” in ethical behavior. He explains that only when we encounter the actual face of the other and see his eyes and smile can we become capable of truly ethical actions.

I would venture to say not only ethical behavior, but all components of genuine human interaction require the participants’ physical presence. We are not just voices, nor words, nor even just souls. However paradoxical this may sound, we are bodies, and our bodies are part of our spiritual selves, part of our humanity. Technological intermediaries and substitutes just don’t cut it, whether they come in the form of the telephone, e-mail, or even webcasts in which we see each other virtually.

This concept is what Rabbi Kazen was trying to convey to Zaleski. We interact fully with each other only when we meet face-to-face. And we interact best with the Divine when we address Him as a group of humans fully present to each other.

Religion in the Digital Age

The threats posed by the technology of the twenty-first century to the human condition must be the concern of all mankind. We have already seen the formation of presidential commissions and international task forces to survey these threats and to make recommendations on how to deal with them. (The report of the presidential commission Human Cloning and Human Dignity, chaired by Leon Kass, MD, PhD, is but one example of such a work.) Numerous works have already been written urging the elimination or restriction of some of these new technologies, or at least their modification and control.
What we have not seen sufficiently is the concern of Jewish religious leadership regarding these vital issues. True, halachic works have been written discussing the implications of these dramatically new technologies for our religious behavior. But writings probing the philosophical, ethical, and moral implications of post-modern technology have been rare, if not non-existent.

Traditional Judaism views the invention, development, and utilization of tools as wonderful expressions of Man’s creativity. Our exercise of our God-given creativity is not only legitimate; it is a way in which we emulate our Creator.
What is creativity? Cognitive psychologists maintain that there are two types of creativity; the first is instrumental creativity, which is value-free. The most ancient example of such creativity is Man’s discovery of fire. Fire is an obviously powerful tool, but intrinsically is neither good nor bad. How one uses fire is the essential question.

There is also a second type of creativity: moral creativity. The morally creative person deals specifically with values. He uses his creativity to determine the moral implications of new discoveries. He deals with questions of good or bad, right or wrong. This is not the creativity of science. This is the type of creativity that can be the role of religion, and most particularly, of the Jewish religion. We must examine Torah sources with ingenuity so that we can creatively address the issues with which we are confronted.

We must especially contemplate how these new technologies affect the Jewish definition of humanity. We must develop a clear perception of what it means to be “created in the image of God.” We must consider well the impact these new developments will have upon that sacred image. We must guarantee, for example, that our value of each human life, and every moment of human life, not become compromised. We must assure that the compassion taught by our religion not be trivialized, and that human freedom and choice not be co-opted by the callous application of technology. We must be sure that the powers won by man do not become powers over man.

It is incumbent upon our spiritual leaders to see that there is a development of morality and ethics that will parallel the development of technology and ensure that the Divine nature of man is not diminished in the march of scientific progress.

← v’hegadeta l’vincha
What’s the Truth about . . . Eliyahu HaNavi at the Seder? →