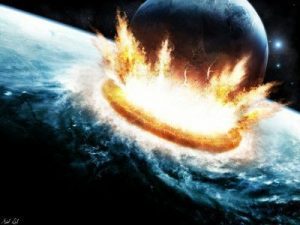 There are a number of suggestions where the year of the end of the world is predicted. The Talmud (Avodah Zarah [9a]) states that the world will last for 6,000 years, 2,000 of Tohu, 2,000 of Torah and 2,000 of Moshiach. Sanhedrin 97a suggests this as well as it states that the world will exist for 6,000 years and there will be another 1,000 years of destruction. Nachmanides, Commentary on the Torah (Genesis 2:3), quotes Kabbalistic sources: “Each of the Six Days of Creation corresponds to a 1,000 year period of future history.”

Rabbi Eli Mansour, though suggests that the year of destruction will be in the year 6,093. How? Simple. In the beginning of V’etchanan it states that Moshe not only prayed, but really tried to find grace with Gd (Chen = grace), as if to get on Gd’s good side so he would enter Eretz Yisrael. Rashi mentions that Moshe, in fact, prayed 515 prayers to Hashem before Hashem told him to stop, it would be pointless as he wouldn’t be allowed entry. Question is, if it was pointless, why did Hashem seemingly waste Moshe’s time until then? Perhaps Hashem should have told Moshe before he prayed, or even after the first prayer, that the answer is no?

The answer is that, when we pray, just like we have the free will to say “no,” so does Hashem have the free will to say “no.” However, Hashem prizes every prayer, and any one he doesn’t use right away gets stored into a “prayer safety deposit box” for future use to benefit us. Rabbi Mansour quotes Kabbalistic sources that state that Hashem valued Moshe’s prayers so much that He saved them specially to protect Am Yisrael from rampant anti-semitism, and each one corresponds to a 7-year Shmittah cycle.

Therefore, it works as follows:

Once that happens, Moshe Rabbeinu’s prayers simply won’t be able to protect Klal Yisrael any longer, which then means that the Gentiles of the world will be able to (and will) wipe us out. When that happens, the world won’t have people supporting the Torah. And, since the Torah is what holds the world together, no Torah means no world, plain and simple.

An Extra for Gematria Addicts

Here’s an extra for Gematria addicts that will literally blow you away. What Rabbi Mansour said before was plain pshat, right? Here’s sort of a supporting proof to that argument.

I recently was introduced to an online Gematria calculator (http://www.c2kb.com/gematria/?word=6093) that is unique in that it also does reverse Gematrias. The Gematria of 6093 using the search actually revealed this long sentence (and no others):

The Earth will be destroyed two hundred twenty-nine years before the millennium; with huge rocks which fall…

This particular Gematria no longer calculates in the online tool. Very strange. -RH

It turns out that the numbers don’t add up and it may likely have been a manual addition. Look at the table plus Gematria equivalent:

“Huge rocks which fall.” Seems like a meteor shower of huge rocks, doesn’t it? Even though 229 years before the millenium has B”H passed (5,771 and now it’s 5,773), nevertheless, it’s pretty scary that 6,093 amounts to a sentence talking about the end of the world when Va’Eschanan points that Moshe’s prayers will lose effect that very year!

Say what you will, but this is still nuts!