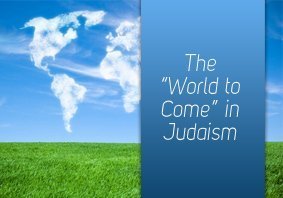 Pirkei Avot 4:21 ‘Rebbi Yaakov said: This world is like a hallway that leads into the next world, prepare yourself in the hallway so that you may enter the parlor.’

When we see this world as a means to an end rather than an end in itself, it puts a totally different perspective on life.

If this world is a means in itself then it can be compared to a supermarket grab competition. In a supermarket grab competition you get 5 minutes to fill your trolley with as much stuff as you can, and the winner is the one that is able to fill his trolley with the most stuff. Likewise, in this world a person is here for an average of about 70 years, many people think that during that time they are to gather as much wealth and possessions as they can – but for what ? Based on that philosophy, once he passes on, does anything that he did in his lifetime really matter ?

‘An hour of spiritual bliss in the world to come is better than the entire life of this world’ (Pirkei Avot 4:22).

Clearly the world to come is in a dimension that we just cannot even comprehend as human beings.

The Mishna is telling us that an hour of spiritual bliss in the world to come is better than what I described above.
(Based on an essay in Michtav M’Eliyahu).

When Kabala books discuss the concept of G-d, they very often talk about a very intense light. A light that is so bright and intense that a human being would not be able to experience such a thing. Not a physical light, but a spiritual light.

Darkness is obviously the lack of light, when there is no light there is darkness. Light pierces through darkness and negates it. Darkness cannot negate light – (i.e at night time, so that it is dark you turn the light off, you don’t turn the darkness on).

Most people are aware that in Kabbala light represents good and darkness represents evil (the explanation above can be used to understand why good will always ultimately prevail over evil).

In our morning prayers we say that G-d “Yotzer Or U’Boreh Choshech”, this is usually translated as ‘He forms light and creates darkness’. We see from this that G-d ‘forms’ light i.e. makes it out of something that already exists (like a potter taking a piece of clay and forming a pot), whereas darkness is something that is created – i.e. it never existed in any kind of form before creation (and that would apply obviously to evil also).

When we do something that is morally good and correct we usually feel good about ourselves. On a spiritual level through our actions some kind of spiritual force has been created that will give testimony for us in the world to come. The opposite is also true, that if we do something bad there are spiritual forces created that will stand up against us in the world to come.

When a lot of people are doing a lot of good in the world, not only will each person have his personal spiritual forces created, but G-d’s ‘light’ will shine upon the world.

Many people have experienced a situation whereby they made some right decisions consistently, and then (as if by chance) they experienced a series of coincidences one after the other that are completely unexplainable, but gave them tremendous benefit. – That is G-d’s light in this world.

This can happen on an individual level, on a national level and even on a global level. Some people might call this ‘a miracle’. On a Kabalistic level, there is no difference between that miracle and the ordinary working of the world – everything is happening because G-d wills it to happen.

The same is true with evil.

Editor’s note: This has been reported by many hundreds of cases. See the stories of Sharon Nachshoni and Nir Abujem. -Rafi Hecht

When a person goes against the will of G-d then G-d’s light so to speak is taken away from him. He will no longer see G-d’s hand in anything, there will be no ‘coincidences’ in his life, he sees everything within the bounds of the physical working of nature, and anything that does happen that is slightly out of the ordinary will be seen as ‘mother nature’.

When mankind takes this even further in the wrong direction, it is no longer that that there is less of G-ds ‘light’, rather there is spiritual darkness.

As ‘light unto the nations,’ it’s our job to illuminate the world. That way, we make this world into the world to come.