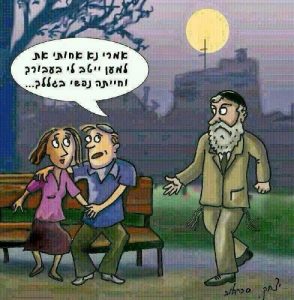 In this week’s Parasha, Lech Lecha, we find Avram and Sarai wandering around to an unknown destination. In their travels they encounter Avimelech who wants Sarai for a wife. Avram tells Sarai to tell everyone that she was his sister so that they shouldn’t kill Avram for his wife (in reality it was a white lie since Sarai was Avram’s cousin and therefore still blood related).

Recently someone shared with me a hilarious cartoon in Hebrew where a Rabbi approaches a teenage boy and girl, with the boy muttering to the girl a la Avram “Please say that you are my sister in order for it’s better for you that I live because of you” when the Rabbi sees them hanging out on a park bench. It’s a typical issue of Yeshivas and their “no boys/girls” policy which in many cases result in expulsion.

On a more serious note, there are two differences:

1. The boy and girl aren’t blood-related unlike Avram and Sarai (even though Kol Yisrael Areivim Zeh LaZeh), and

2. It’s doubtful that the Rabbi “wants” the girl the way Avimelech “wanted” Sarai.

On an even more serious note, this is a chronic issue that many Yeshivas face. When a boy or girl turns into a teenager, it’s very difficult for them to not want to date. B”H they’re of a more mature age and their attraction to the opposite gender is only natural. In fact, in ancient times it was perfectly normal for boys and girls to marry and have children when they reach above the ages of 12-13. Very recently, teenage weddings were commonly seen in countries like Yemen and Morocco. Also, many Chassidim today get married as young as 16, 17 and 18. This was all done in order to curb the boys and girls from sinning in “that manner.” In fact, the Talmud talks critically about a boy not getting married by age 20 as it’s certain that seed has been wasted!

All this was looked at from a financial perspective. If the boy was financially well-off he could get married and then learn Torah. If he was lower-class he would learn Torah first, then marry, as it was known that the pressures of work and struggling to raise a family would ebb away at valuable Torah learning time.

However, in our Westernized yeshiva system, the Rabbis have a real dilemma. On a rational level, a boy needs a job to support a wife and family. That’s what school is for, and yeshiva is meant to instill critical thought, Torah-observance and hopefully some Yiras Shamayim on the way. In order to integrate the two, high-school students need to go cold-turkey until 17-18, and today when you cannot get a job without college/university, until 20-22 at least.

This logically makes sense. An emotional involvement with a girl takes away from time otherwise devoted to studies, classes and homework, and an emotional breakup takes away even more time. I personally know of someone that took him 11 years to earn his bachelors degree, in part because he met his wife during his second year, and the “last 2 years” needed to be stretched out, to put it mildly. In my personal case (and I have no regrets – it was worth it), it took me 6-7 years to earn my Masters degree when I could have earned it in 2 years without the responsibility of a full-time job and getting married. Again, I repeat, for me it was well worth the price. I also know of countless cases of college drop-outs simply because work and raising a family took its toll in terms of time and financial expenses.

However, emotionally, it’s tough. I don’t think I need to get into why that is. That said, it’s as Hashem wanted in order so that the best chance of having children are at that age.

So what’s a Yeshiva high school administrator to do? There’s simply not enough time in the day to fulfill teaching duties and act as a psychologist to a teenager’s urges. Therefore they are forced to take the quick and efficient route: play the bad cop – if you don’t abide by our rules, you’re out! No wonder why many Yeshiva students are at odds with administrators!

This is a very sensitive topic where one blog post won’t completely scratch the surface of. All I’m saying is that that comic touched on a personal nerve of mine.

← Tenach: The Northern Kings Attack
The Story of Sharon Nachshoni →