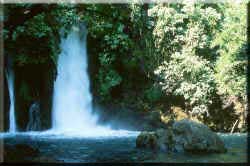 Another beautiful place to visit, which is very close by, is the Banyas, sometimes called the Panyas. The upper part of the Banyas begins in a cave which the Gemarah says is the very beginning of the Yarden river. In the past, Greek idols adorned these niches and Greek inscriptions have been uncovered here. Pan seems to have been the name of one of their gods. Hordus built a temple at the site dedicated to the Roman ruler, Agustus Caesar. Archaeological excavations have uncovered a Roman city which once stood right across the roadside. If one follows the path downstream, one comes to a powerful waterfall known as the lower Banyas. One can drive directly to this lower fall rather than take the long hike. The water here is ice cold and one is not permitted to swim here because of the strong current. A large tree at the top of the falls divides the flow into two beautiful streams. The tumultuous Banyas River is lined with luxurious foliage and makes for some beautiful pictures. 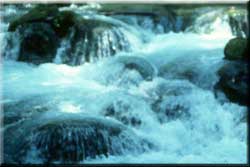 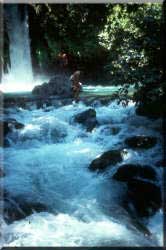