Gamla is a very high mountain resembling a camel’s hump. Gamal means camel in Hebrew. It is mentioned by Yosefus as the place where the Jews tried to defend themselves against the powerful Roman Army. Gamla’s Jewish soldiers fought to the bitter end. It took more than 55,000 crack Roman troops to overpower them and destroy the city. Excavations have revealed an ancient shul as well as an olive press, with a mikvah right next to it. Some of the finds made in Gamla can be seen in the Katzrin museum. 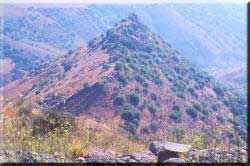 Gamla’s steep cliffs reach a height of 250 meters and are the tallest in the Golan. Here one can spot many different species of birds such as vultures, buzzards, falcons, eagles, pelicans, cranes and storks.