The holiest part of the city is, of course, the Har Habayit upon which the Beit Ha’Mikdosh stood. This area which measured 500 amos (cubits) by 500 amos remains holy to the present day and therefore Jews (who nowadays are considered unclean) cannot walk upon it. (Note: An Amoh is approximately 19 inches) The present Temple mount area is much larger than 500 amos square and there is much disagreement as to the exact place on which the Beit Ha’Mikdosh stood. Today one sees two Arab Mosques on this area. The golden capped dome in the center is called the Dome of the Rock (or Mosque of Omar) and was built by the Moslems. Some believe that the place where the rock inside it lies, is the place where the mizbayach once stood. 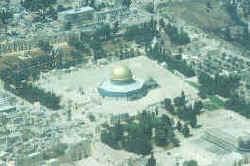 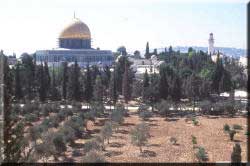 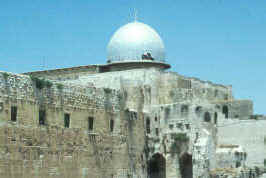 The building to the side with the silver dome is called the Al Aksa Mosque, which is the third holiest shrine of the Moslems.

You can see a beautiful slide show (in RealPlayer format) of the Western Wall ( Kotel Ha’Maaravi ) narrated by Steven Hill on our JewishVideo page.