The Har Ha’zaytim (the Mount of Olives) also called the Har Ha’Mishcha, is the mountain directly across and to the east of the Har Ha’bayis (the Temple Mount). The valley in between the two mountains is called the Kidron Valley and is also referred to by the navi as Emek Yehoshofot-the Valley of Judgement. 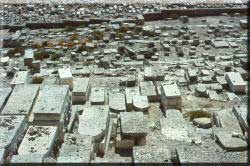 The mountain gets its name because of the many olive trees that once grew here. The Medrash says that the olive branch brought back by the dove which Noach sent out of the Teivah (Ark), was taken from here.

From the top of this mountain one gets a magnificent view of the entire Har Ha’bayit as well as the city of Yerushalayim in the background.

It was on this mountain that the Sanhedrin would light the torches to signal the beginning of the new month.

It was here that they would bring the special red calf-the Parah Adumah- whose ashes would be used to purify those that were unclean and could not enter the Beit Hamikdosh. There was once a bridge that connected these two mountains upon which the Cohen would lead the Parah Adumah (the Red Calf).

This is also the mountain which Dovid Ha’melech climbed when fleeing from his renegade son, Avsholom, who tried to assassinate him.

Since ancient times, Jews always wanted to be buried here. It is believed that those buried here will be the first to arise at Techias Ha’meisim- when the dead will be resurrected.

Nowadays, this mountain contains thousands of graves which include some of the greatest neviyim, and tzaddikim from times gone by. Inside a deep cave towards the top of the mountain lie the neviyim Chagai and Malachai. Not far away , in the Arab part of town, lies Chuldah Ha’Neviya (the prophetess)

Lower down the mountain we have the kever of the Or Ha’Chaim Ha’kodosh. At the very bottom, we have the kever of Avsholom (Dovid’s son) who was killed as he hung by his hair from a tree leaving no children. This memorial is known as Yad Avsholom. Right next to him is the kever of Zecharya Ha’novi who was murdered in the Beit Ha’Mikdosh itself. There one can also find a cave thought to be of a k family known as the Bnei Chtzir. Some say that it was the site where the King Uziyahu who became a Metzorah when he tried bringing ketores on the inside mizbayach is buried. Further down the road, one can find the burial site of the Bartenura (who wrote the peirush on mishnayos). Here lie many prominent Jews from the past century, such as Rav Yosef Chaim Sonnenfeld, Rav Yehoshua Leib Diskin, Rav Shmuel Salant, and the list goes on and on.

Unfortunately, when the Arabs took control of this area (from the years 1948-1967), they destroyed most of the gravestones , building roads right on top of the holy graves and toppling the stones, using them for whatever they felt like. It took many years and much hard work to repair the great damage done. So much for how the Arabs treat our holy sites!

The gemorah says that when the Shechina left the Har Habayis because of our sins, it made 10 stops before returning to heaven. The last stop it made was upon this mountain. The Novi Zechariah says that it will be here that the Shechinah will once again descend, upon the arrival of Moshiach ‘”Veomdu raglov byom hahu al har Hazaytim” (Zechariah 14:4)-His feet will stand on that day on the Mount of Olives, which faces Yerushalayim on the east, and the Mount of Olives will split open at its middle, east to west, and form a wide valley…….and you will flee as you fled from the earthquake that was in the days of Uzziah….

It is here, says Zechariah Ha’novi, that the war of all wars known as the war of Gog U’Mogog will take place. It is here that all the nations will gather in their unsuccessful attempt to destroy Klal Yisroel. The Shechina then will come down and properly judge them as the posuk says “this will be the plage with which Hashem will strike all the peoples that have organized against Yerushalayim: each one’s flesh will melt away while he is standing on his feet; each one’s eyes will melt away in their sockets; and each one’s tongue will melt away in their mouths”. This is why this valley is called Emek Yehosofot-the Valley of Judgement. The Jews will win the greatest victory in history and then “Hashem will be the King over the entire land; on that day Hashem will be One and His Name will be One.” May it happen speedily in our times.