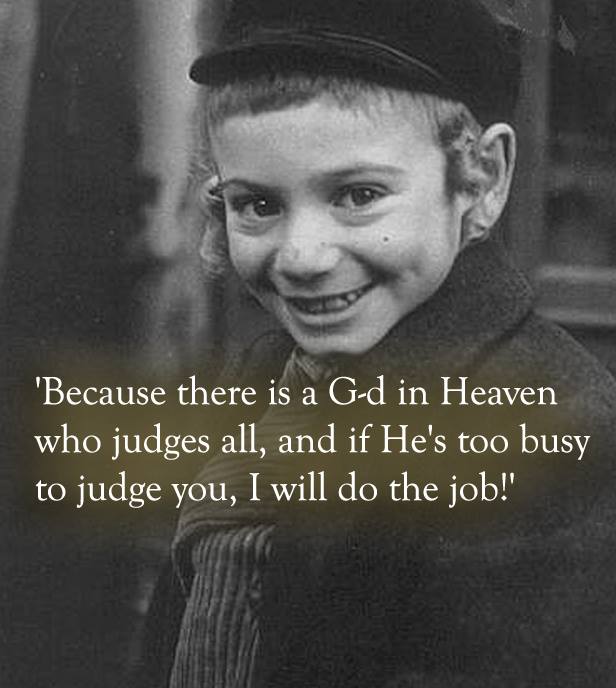 One Shabbat, the Gabbai (sexton) of a village synagogue quieted the noisy congregation with unusual zeal.

“Today is the 50th anniversary of our beloved Rabbi’s taking office. It is also the day of his retirement. This will be his final sermon.”

In the ensuing silence, the old Rabbi began, “There was once a bookish boy who feared nothing more than the marketplace. Every time he ventured there, a large and thuggish boy would torment him. It grew so bad that the bookish boy walked a great distance around the town walls, just to avoid the thug and his cronies.

“On one occasion, however, he had no choice. Relatives had arrived, and his mother rushed him off to buy additional supplies for Shabbat dinner. Sure enough, the thug and his cronies spotted him, and when they realized he was carrying money, they snatched it from him.

“It seemed that all was lost, when a new boy appeared. He was no bigger than the bookish boy, but he carried himself with authority. The newcomer said, ‘Leave him alone!’

“‘Because there is a G-d in Heaven who judges all, and if He’s too busy to judge you, I will do the job!'”

“The newcomer grabbed the money, gave it to the bookish boy, and shooed him away while he continued glaring at the thug and his cronies.”

The old rabbi took a deep breath, and then said, “My friends, I was that boy, and that was the day I heard G-d’s calling.”

“I don’t normally pass through this village. I’ve only been here once before. Yesterday, however, a bridge collapsed upriver and I was forced to cross here. I arrived just in time for Shabbat, and a passerby directed me to your shul.

“The only other time I was here, I came in the company of my father, who travelled the marketplaces, selling medicinal amulets. Often he would say he cured nothing himself – he was simply G-d’s assistant. I learned what he meant when I saw a bookish boy robbed by a thug and his cronies. Without thinking, I stepped in. I should have been smashed, but G-d protected me, and the thug simply walked away. After that the cronies had no courage.

“Since then, I’ve stood up for the defenseless many times, and G-d has blessed me with both safety and prosperity. Yet the greatest reward I’ve ever received is to learn that assisting you led to your becoming this village’s Rabbi for 50 years! Baruch Hashem!”

The Rabbi wiped tears from his eyes. Finally, he gathered himself enough to speak.

“You are truly G-d’s assistant, my friend, but you did not defend me. The bookish boy became a great merchant, who supplies the Shabbat dinners of every needy family in this village. He also built this synagogue for us, and serves as its Gabbai.”

A chorus of “Amen!” and “Baruch Hashem!” erupted from the congregants, all of whom were aware of the Gabbai’s great beneficence. He blushed and responded with a humble nod.

Then the Rabbi concluded, “How great is G-d, whose assistants are everywhere!