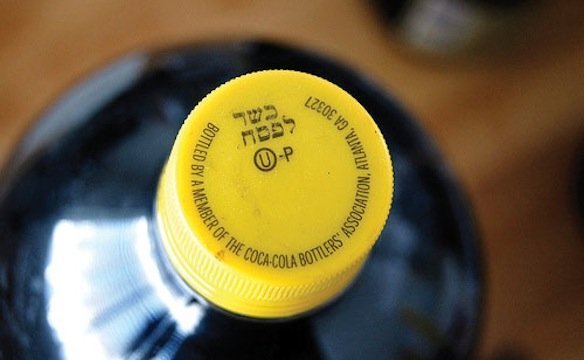 It contains pure cane sugar, is chametz-free, may taste better than the year-round beverage — and is effectively off-limits in the state of California.

While the story of kosher for Passover Coca-Cola may not be as riveting as God unleashing swarms of locust on the Egyptians or splitting the Red Sea, it’s one that, particularly for Jews in California, could rival at least some of the slower portions of the Passover haggadah.

Why on these eight days does the soda taste different than on all other days? Cane sugar.

In its year-round formula, Coca-Cola uses high-fructose corn syrup for sweetness. But for Ashkenazim — Jews of Eastern European descent — corn and corn-based products are forbidden during Passover. To satisfy the sweet tooth of Jews who strictly observe Passover, Coca-Cola substituted cane sugar for corn syrup.

For many, a yellow-capped Coke on Passover — instead of the traditional red — is as strong a tradition as matzah pizza and macaroons. It is perhaps the soda most associated by Jews with the holiday. But one major problem stands in the way of tradition these days — California state law.

The Passover version of the popular soft drink has been, since 2011, effectively outlawed in the Golden State, but shoppers can still find it in some stores that acquire it from other states.

The culprit? A chemical whose name sounds like something out of a 1980s science fiction thriller: 4-Methylimidazole, or 4-MEI.

An ingredient in regular Coca-Cola, 4-MEI is a chemical byproduct naturally formed during the heating and browning process in some foods, like caramel. A change in state law required some sort of warning or, for Coke, a change in its normal formula, something that had unintended negative consequences in its ability to create a Passover version.

The problem is that 4-MEI is “known to the state to cause cancer,” according to the state’s Office of Environmental Health Hazard Assessment’s (OEHHA) Web site. If 100,000 people consume at least 29 micrograms of 4-MEI per day for 70 years, one of them will get cancer from the exposure, OEHHA spokesperson Colleen Flannery wrote in an e-mail. That 1 in 100,000 chance exceeds the state’s “safe harbor limit,” making it one of nearly 800 chemicals singled out by the Safe Drinking Water and Toxic Enforcement Act of 1986 — also known as Proposition 65.

If you’ve ever peered around a gas station while filling up or let your eyes wander while waiting in line at a Starbucks, you may have noticed a sign or label with a “Proposition 65 WARNING.” When a chemical appears on the Prop. 65 list, the law states that businesses that sell products containing more than a certain amount must provide a clear and visible warning to the consumer or risk penalties that reach up to $2,500 per violation per day.

Just this month, a California citizen filed lawsuits against several companies “for failure to warn about exposures to 4-MEI contained in imitation maple flavor and caramel coloring,” according to Lynda Gledhill, press secretary for California Attorney General Kamala Harris. Gledhill wrote in an e-mail that soft drink companies have yet to face any Prop. 65 lawsuits.

How much of a real threat the chemical poses has been disputed. The U.S. Food and Drug Administration (FDA) disagreed with California’s classification of 4-MEI as a carcinogen. FDA spokesman Douglas Karas wrote in a statement last year that to consume the amount of 4-MEI that was linked to cancer in mice, one would “have to consume well over a thousand cans of soda a day.”

Michael Jacobson, executive director for the Washington, D.C., Center for Science in the Public Interest (CSPI), however, called the FDA’s statement “malarkey.”

“The more you consume, the greater the risk,” he told the Journal.

CSPI, since its formation in 1971, has advocated for stronger government policies and has pressured the FDA to take stricter positions on caramel coloring. Jacobson was happy to see 4-MEI added to the Prop. 65 list in California because it prompted Coke to use a caramel with lower doses of 4-MEI.

When 4-MEI was added to Prop. 65’s list in January 2011, the company had one year to comply with the law. So, in 2012, it tweaked parts of its closely held formula, modifying its caramel by, in part, reducing the levels of 4-MEI.

But the change didn’t come without a price. It appears to have made the drink unacceptable for Passover in another way, and more alterations were necessary to make the drink seder-worthy.

Last April, the Pasadena Star-News reported that Coca-Cola spokesman Bob Phillips anticipated Passover Coke being available in 2013. But when the Journal contacted Coca-Cola several weeks ago, spokeswoman Michele McKillip wrote in an e-mail that the company is still testing its new Passover formula for “shelf life.”

In theory, Coca-Cola could revert to its old Passover formula, but it would then have to make sure that consumers were warned before every purchase, perhaps even with a warning label on every bottle. Coca-Cola, McKillip wrote, hopes to be able to provide a Passover version in 2014. n

← Bedikat Chametz in the Next Generation
Six13 – Chozen (A Passover Tribute) →