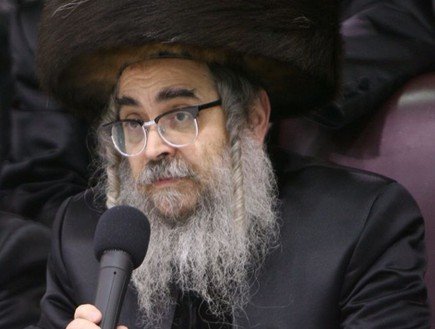 Without wasting time, R’ Aharon Teitelbaum went forth and issued the following public statement (supposedly crying while he said it) in light of the three teenagers that were murdered:

Speaking in Yiddish, the Rebbe began his words expressing his deep sorrow over the tragedy (courtesy VINNews).

“I want to speak about an incident that happened in Eretz Yisroel where three Jewish lives were taken in an extremely brutal manner, Hashem yeracheim. When something tragic happens in our holy land, every heart bleeds and Hakadosh Baruch Hu feels the pain of his nation and Jews everywhere feel tremendous sorrow over what happened here.”

The Satmar Rebbe went on to describe the widespread sense of mourning that has blanketed the Jewish community worldwide and said that he has no doubt that this tremendous sorrow will bring even strangers to come and be menachem aveil.

“But with all the pain and devastation that is part of this terrible incident, we have to examine the circumstances from a wider perspective and with wisdom with eyes that are open to true daas Torah.

During the funerals, the parents eulogized their sons, but I think it would have been preferable if they had done teshuva, if they had said viduy with tears, in the nusach that is used on Yom Kippur, to repent for their decision to live and learn Torah in a place of barbaric murderers.

Who gave them a heter (permission) to live in a place like that, where they were living among known murderers? Is there no place in Israel to live and to learn other than in a place of tremendous danger?

Who gave them permission for themselves and for their children to live and to learn Torah in the midst of the lion’s den? To put their lives at risk, and the lives of their families at risk? It is all because of the yetzer hara and the desire for Jews to inhabit the entire State of Israel. It is Zionism for the mehadrin min hamehadrin.”

Placing the blame for the deaths of the three teens squarely on the shoulders of their parents the Rebbe continued, “it is incumbent upon us to say that these parents are guilty. They caused the deaths of their sons and they must do teshuva for their actions.”

Discussing the death today of a Palestinian teen, the Satmar Rebbe observed that the revenge had already begun.

“There is a suspicion that this murder was an act of vengeance and who knows if Jews all over the world are not in danger now from the Arabs. I hope that this youth was killed by another Arab but it is wise to be afraid. It is already 2,000 years that we are in exile and during that time millions of Jews have been killed. Jews have always been the ones who were killed, not the ones doing the killing.”

The Satmar Rebbe said that the truth must always be said, even when it is difficult.

“My holy uncle (Reb Yoel) taught us to love the truth and to despise falsehood.
In the generation prior to Moshiach, truth will be a scarcity and he taught us to fight with all our might against lies and to say the truth even when times are difficult, even if it will bring great troubles, even if we are face to face with arrows and catapults and if people will say that we are the enemies of Israel.
But it is not we who are the enemies. It is the Zionists, who place the lives of the Jewish people at risk for the sake of Zionism. The enemies are those who take revenge and who awaken the ire of the murderers who will surely take revenge and the cycle of vengeance will continue.

This is what Dovid Hamelech meant in Tehillim when he said ‘I hate falsehood and am disgusted by it.’”

Urging the Chareidi world to stand strong and to distance itself from the settlements, Zionism and revenge, the Satmar Rebbe concluded his remarks with a prayer.

“Hakadosh Baruch Hu should watch over the entire Jewish nation wherever they may be, in Israel and all over the world from all sorrow and all sadness and he should break the yoke of the gentiles, the wicked and the evil Jewish Zionists.”

“They (the parents) are still in shiva and The Grand Rabbi is guilty of causing them more pain during their week of mourning. I don’t care who you are or what your ideology might be, it is not acceptable to show no sense of empathy or compassion for the pain of others. I think he needs to get on his luxury charter or buy the entire First Class section of a 747 and fly to Israel and apologize in person to the grieving families. They are extraordinary people, so they won’t make him beg for forgiveness, but they should.”

I personally agree here. I am well aware of the Satmar ideology that Israel “doesn’t have a right to exist until the arrival of Moshiach,” but there is a time and place to impose ones religious views. The parents are still sitting Shiva!!! Who he to say that “it’s your fault since you live with enemies?!?” For the record, the views the Kiryas Joel Satmar Rabbi expressed does not reflect on the views of the rest of world Jewry.

Now that I’ve summarized my (and hopefully most of mainstream Jewry) thoughts on the matter, allow me to answer the “living in the lion’s den” comment. Many people forget (B”H for that) that before there was a state of Israel, there still were Pogroms, pillaging, kidnappings, and rapes. The current State isn’t the direct cause of anything new here. People will continue to persecute and kill Jews no matter what, and always come up with an excuse, no matter what. Also, the attitude of Jews continuing to live under Dhimmi status, where Jews are told what to do, how high a Shul is built, and what music (if at all) is permitted, is appealing for them since this is what we were forced to get used to.

The point I’m trying to make here is that we as Jews are always in danger, whether or not we feel it. It wasn’t so long ago where much of European Jewry felt safe and secure in the most Westernized part of the world at the time before the most indescribable happened.

On the other hand, Mr. Asher Keren of Times of Israel made a valid point in that Jews in Israel are just as guilty by being complacent and allowing corrupt politicians change laws and put people’s – army-serving, taxpaying people – lives in danger. He pointed out that a nation filled with doctors, lawyers, bank managers, teachers, nurses, bus drivers, engineers, researchers, accountants, business owners, rabbis, intellectuals, political leaders (at least 3,000 of them) didn’t go on a hunger strike or “chain themselves to the Knesset in a mass hunger strike before the countless Arab murderers were released from jail,” presumably in reference to the Gilad Shalit swap. In this respect the Satmar Rebbe displayed a love towards his fellow Jews much more profoundly than any religious Zionist could.

Update: The above news on the triplets has been unconfirmed. Not very nice!