“We have identified more rocket fire from the northern Strip than other sectors and this morning we are calling on the population to evacuate from there ahead of an escalation of (Israeli) attacks,” the IDF said Sunday morning. 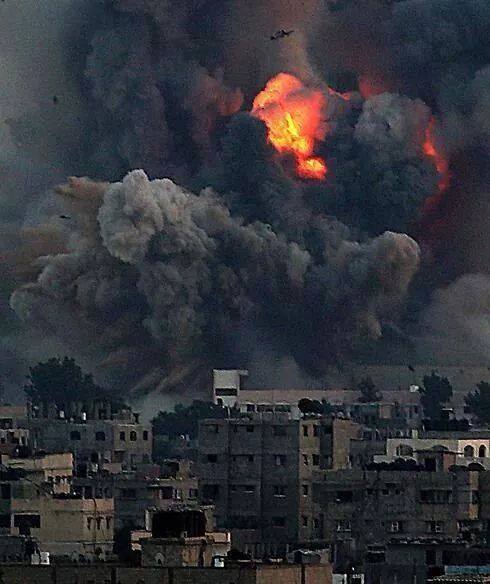 The IDF Spokesperson’s Unit announced that the military has airdropped leaflets on the northern Gaza Strip with similar messages. Locals have also been sent pre-recorded messages and video clips.

“It is the intention of the IDF to attack from the air terror infrastructure and terrorists in the area east of Al-Attara,” the leaflets warn. “Residents must evacuate their homes by 12 pm, noon, today heading south towards Jabalia.”

The Israeli warnings told Gaza residents that “the IDF operation will be temporary and short. Those who do not adhere to these directives will jeopardize their own lives and the lives of their families. Be careful, stay safe.”

A senior IDF official said Saturday night that “in the next few hours, in light of the fact Hamas is hiding behind civilians, we will change patterns of action and start evacuating Palestinian civilians in the northern Gaza Strip, where long-range rockets are fired from.”

These civilians, the official said, will receive messages asking them to evacuate. These messages will also tell them terrorists were operating among them.
“Following the evacuation, there will be a significant attack there,” he noted.

“The objectives for this operation are to deal a significant blow to Hamas and Islamic Jihad, decrease the fire on civilians and strengthen the deterrence. So far, 1,300 targets were attacked. Launchers, command and control centers and more,” he said.
The IDF will strike areas from which rockets are launched at Israel, in which rockets are manufactured, and in which terrorists train and hide their rockets and other weaponry.
“We did this in Lebanon, and we haven’t done this in the Gaza Strip so far. This will increase the amount of casualties,” he said.

The move was decided on after consultations with legal advisers dealing with international law, who will also accompany the commanders.
“The salvos on Saturday evening towards central Israel show exactly what Hamas and Islamic Jihad want to do. This is something Hezbollah started. Firing at targets in varied distances, including psychological warfare and maximum intimidation of citizens,” the senior official said.