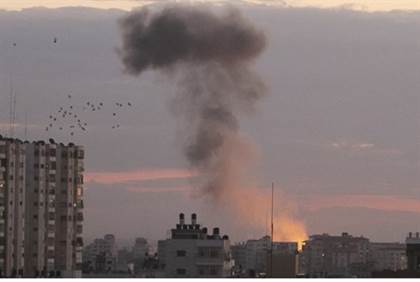 IDF artillery began shelling targets all along the northeastern Gaza Strip, Channel 2 reported Monday evening after 8 p.m. Earlier , the IDF sent messages to thousands of Palestinian Arabs living in the region to flee, shortly after a mortar shell killed at least four people in Israel.

“A short while ago, phonecalls were made and text messages were sent out to the civilian population of Shejaiya, Zeitun and eastern Jabaliya calling them to evacuate immediately towards central Gaza City,” a statement from the IDF said, referring to three areas to the north, south and east of Gaza City.

Such phonecalls are usually a prelude to an IDF attack on a region, and are meant to reduce civilian casualties.

Shortly afterward, the IDF began striking areas of Gaza that had not been attacked before, including Zeitun and Jabaliya.

Israel had appeared to be winding down its attack operations in Gaza Monday and contenting itself with blowing up the remaining tunnels from Gaza into Israel. However, a serious incident in which at least four Israelis were killed by a Hamas mortar changed all that.

At least four, possibly five, people were killed when the mortar shell scored a direct hit on a home in the Eshkol region Monday afternoon. Four other people were seriously injured. The injured were taken to hospitals in Beersheva and Ashkelon, Voice of Israel public radio said.

In another serious incident, five Hamas terrorists were eliminated near Kibbutz Nahal Oz. They appear to have infiltrated via an attack tunnel.

The house was hit in a major round of rocket firing Monday afternoon, as the last vestiges of what was supposed to be a 24-hour truce evaporated. By 6 p.m., Hamas had fired nearly two dozen rockets at Israel, most of them in the late afternoon. Iron Dome missiles shot down two rockets, one over Ashkelon and one over Sderot. At 7:30, rockets were fired at the Hadera and Binyamina region, not far south from Haifa.

← After Morning of ‘Return Fire Only’ Policy, IDF Resumes Full Military Activity in Gaza
Never Again: What the World Wants Israel to Be →