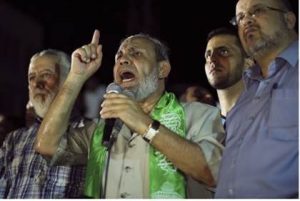 Several senior Hamas and Islamic Jihad leaders appeared in public on Tuesday shortly after a Gaza truce took hold, the first time they had done so since the conflict began on July 8.

Among them was Mahmoud al-Zahar, a senior member of the Hamas political wing, and senior Islamic Jihad leader Mohammed al-Hindi who gave a rousing victory speech to thousands of people gathered in a square in Gaza City’s Rimal neighborhood.

He was referring to a two-day suspension of flights into Tel Aviv by major US and European airlines in mid-July after a rocket from Gaza struck near the runway, in a move hailed as a victory by Hamas.

A ceasefire ended 50 days of fighting between Israel and Gazan terrorists.

The IDF’s Operation Protective Edge was ended with Prime Minister Binyamin Netanyahu’s acceptance of a ceasefire deal that will see a return to the status-quo established following the last serious escalation in 2012.

The decision to accept the ceasefire has triggered some controversy, with members of Israel’s Security Cabinet split over the issue and some anger over Netanyahu’s decision to use a legal technicality to avoid acabinet vote.

Despite claims of “victory” by Hamas and Islamic Jihad, the two groups suffered significant losses during the conflict, including the assassination of three senior Hamas commanders last week.

← Cabinet Was Split Over Ceasefire – But Netanyahu Accepted Anyway
BOOM: This Can Possibly Be the Last Thing You Want to See Next to an Arab in Israel →