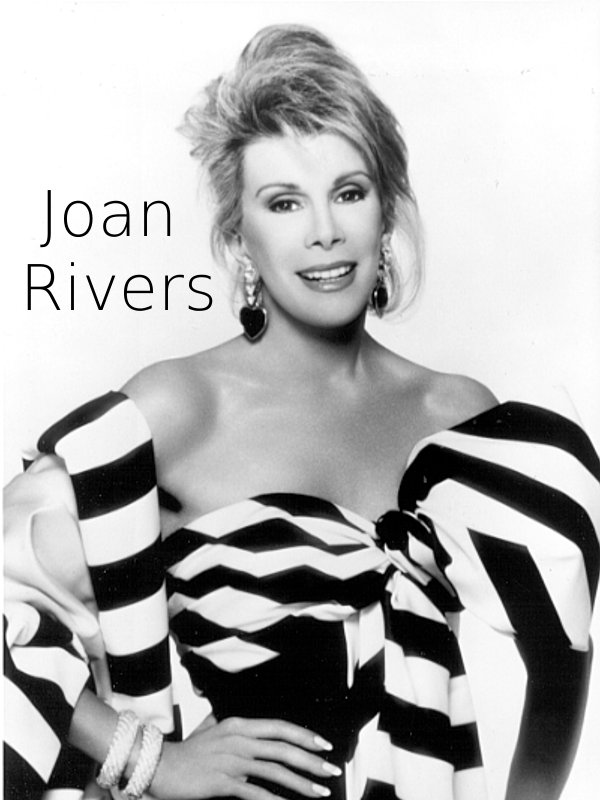 Legendary comedienne Joan Rivers died on Thursday —  exactly a week after she was rushed to a Manhattan hospital when she stopped breathing during a routine throat procedure, sources told The Post.

Rivers’ daughter, Melissa, had been keeping vigil by her mother’s bedside at Mount Sinai Hospital as her condition failed to improve since she went into cardiac arrest on Aug. 28 at Yorkville Endoscopy.

“It is with great sadness that I announce the death of my mother, Joan Rivers,” Melissa said in a statement. “She passed peacefully at 1:17pm surrounded by family and close friends. My son and I would like to thank the doctors, nurses, and staff of Mount Sinai Hospital for the amazing care they provided for my mother. Cooper and I have found ourselves humbled by the outpouring of love, support, and prayers we have received from around the world. They have been heard and appreciated. My mother’s greatest joy in life was to make people laugh. Although that is difficult to do right now, I know her final wish would be that we return to laughing soon.”

She was moved from the intensive care unit to a private room on Wednesday.

The State Health Department has launched an investigation into the clinic.

A funeral for Rivers has been planned for Sunday at Temple Emanu-El. “It is a terribly sad day for all of us. We mourn with her family, friends and all those milliions to whom she brought laughter and joy,” Rabbi Joshua M. Davidson said in a statement.

Rivers, a pioneering wisecracker whose acerbic wit and insult-laden antics reached across several generations, will forever be linked with “Tonight Show” legend Johnny Carson, who gave her her first big break in show business. Carson mentored her through her early years of stardom, Rivers became a trailblazer in her own right, paving the way for a generation of funny women.

Rivers earned her stripes on the stage poking fun at celebrities from Russell Crowe to Kanye West with zingers that were often as crude as they were funny.

“I’ve learned to have absolutely no regrets about any jokes I’ve ever done,” she told an interviewer a few years ago. “ I got a lot of flack for a joke I made about Heidi Klum and the Nazis (”The last time a German looked this hot was when they were pushing Jews into the ovens.’), but I never apologized for it. I said Justin Bieber looked like a little lesbian — and I stand by it: He’s the daughter Cher wishes she’d had.

“You can tune me out, you can click me off, it’s OK. I am not going to bow to political correctness. But you do have to learn, if you want to be a satirist, you can’t be part of the party. Meaning, you can’t go

horseback riding with Jackie O in Central Park if you’re going to make a joke about her that night.”

But as caustic as she could be to her Hollywood’s A-listers, no one got a harsher Joan Rivers treatment than Joan Rivers herself.

“The only thrill in my sex life now is when I lean up against the blender,” Rivers quipped more than 30 years ago.

More recently, Rivers joked about her penchant for plastic surgery. “My face has been tucked in more times than a bedsheet at the Holiday Inn,” she said.

Rivers coined the catchphrase “Can we talk?”

But Before Rivers reinvented herself as a red carpet curmudgeon on E! network’s “Fashion Police,” and on shows such as “In Bed With Joan” and “Joan & Melissa: Joan Knows Best?,” she worked her way up the ladder, hitting comedy clubs and making appearances on such programs as “Candid Camera” and “The Carol Burnett Show.”

Rivers was born Joan Alexandra Molinsky on June 8, 1933 in Brooklyn, the daughter of Russian Jewish immigrants.

Rivers started off as a Broadway actress on and quickly moved on to stand-up comedy to pay the bills, making her rounds of New York City comedy clubs.

By 1965 she appeared on “The Tonight Show with Johnny Carson,” the beginning of her most important professional relationship, but one that ended in a bitter feud when Rivers began her own late-night talk show.

“I’ve learned from my dealings with Johnny Carson that no matter what kind of friendship you think you have with people you’re working with, when the chips are down, it’s all about business,” Rivers told an interviewer several years ago.

“He loved me, loved me, loved me, and I left his show very honorably to do my own show. Then the minute I was competition for him, he cut me off at the knees. He said I never called him, and it followed me for 10 years. I would go on a set, and people would say, `We heard you were terrible to work with.’ It was NBC who did that to me. I’ve never done Jay Leno, but I’m sort of glad about that. He wouldn’t know what to do with someone funny.”

Along the way, Rivers married twice, the second time in 1965 to Edgar Rosenberg, who committed suicide in 1965. That union produced daughter Melissa, Rivers’ prime time TV partner. Rivers second career has included stints with her daughter as well as shows and appearances on QVC, TV Guide Channel and Celebrity Apprentice, which she won in 2009.

She is also the author of 12 books, including one released this year, “Diary of a Mad Diva,” in which she wasted no time getting in her licks.

“This book be dedicated to Kanye West, because he’ll never f—in’ read it,” she wrote in the dedication.

A fan of Twitter, with more than 2 million followers, Rivers recently posted tweets about the deaths of Robin Williams and Lauren Bacall.

Rivers remained in the hot seat right up until the end. Last month, during a discussion about her new book, she stormed out of an interview with CNN’s Fredricka Whitfield, a walkout Rivers mocked days later during an appearance on David Letterman’s “The Late Show.”

Earlier this month, she said Palestinians “deserve to be dead” when asked a question about the body count in the latest Mideast conflict.

Rivers had always said she had little patience for political correctness, and that she saw nothing wrong with trying to make people laugh. She said she couldn’t imagine doing anything else with her life.

“Somebody said, ‘You can make six dollars standing up in a club,’” she said last year, “and I said, ‘Here I go!’ It was better than typing all day.”

← IS within 30 km of Ezekiel’s tomb
Joan Rivers Kicked Off Talk Show for Potty Mouth! →