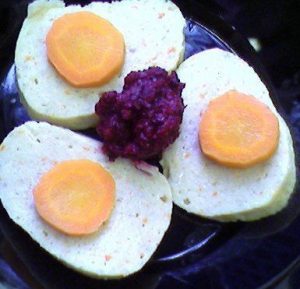 To put it mildly, food defines a culture or civilization. Throughout the millenia Jews have been scattered around the world and as a result developed different culinary tastes. Here I present a list of 13 of the most popular foods in the U.S. and Israel where people can easily say, “Yeah, that’s Jewish.”

Gefilte fish is a staple at the Shabbos table. Sweet by nature, people commonly add sharpness to it with Chrain, a horseradish-beet condiment. Some eat Gefilte fish between two slices with Challah, and, mmmm….

Who can say no to chicken? Edible during the week and on Shabbos, this was at one time a primary source of meat for Jews in Eastern Europe that were too poor to afford anything more decadent. You can make chicken soup, different kinds and cuts of chicken with different spices, and more. Before Yom Kippur there is a tradition of “Shlugging Kaparos” with a live chicken over ones head, then slaughtering it and distributing the contents to the poor of the city so they would have what to eat. Watch out, though – if it gets excited while being shaken, the chicken can… well, some things are better left unsaid.

This is soul food right here. American Jews at the turn of the 20th century used to frequent deli shops.

Another one right there. Lox, short for gravlox, goes with bagels and other bread, with cream cheese or butter. Goes well with a cup of coffee.

Challah is typically offered on Shabbos. It’s a bread made specially for that occasion, and is made with eggs and sugar. A budding entrepreneur decided to launch a business out of it, called Challywood.

It’s light, and mixed with salt and pepper on Matzah, what’s not to like?

Cole slaw is always great as a side dish for a meal with meat. Cabbage rolls stuffed with ground meat was very popular in Eastern Europe, being called Halabchkes, Galubtzes, and other variations.

Cholent is that hot stew served on Shabbos. Sephardim have their own versions. Hamin (pronounced Hhom-een) has an egg in it, and Dafina, another variation, has chick peas and barley, without the beans.

Kishke (literally intestines) used to be made of animal intestines in Eastern Europe. Today in America, it’s made from regular meat and Matzah meal.

Pizza, an Italian food, has become very popular with Jews thanks to it’s affordability, availability and great taste. Honorable mention goes to calzones.

Falafel is a very popular Middle-eastern food that took Israel by storm. Once Israel had Falafel as part of it’s cuisine, the entire Jewish world followed suit.

Shwarma is also a popular Middle-eastern food. Traditionally made from lamb, I’ve only seen chicken shwarma as it’s much cheaper for the Westernized customer.