For many religious young (and old) single Jews, it’s very hard to date when people become increasingly pickier and pickier. Here are eight reasons why this happens. 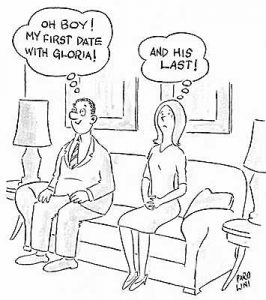 1. S/he Looks Different Than the Profile Picture Taken Years Ago

While not a rule, a very good guideline is to have a profile picture that’s at most 2 years old. People can change in appearance over time. Heck, a body completely replaces itself every 7 years.

This applies with all dates. Clashing personalities is one where poor chemistry is lacking. Better luck next time.

3. Families “Stuck Their Noses In” + Miscommunication

This happens all the time. When a “he said-she said” incident with family members involved occurs on the first date, unless there is something major keeping two people together, usually it’s a bad sign for things to come.

Bad weather can literally “rain on your parade.” It especially hurts when there is no backup plan.

When there is nothing in common, that’s usually “the beginning of the end.”

In today’s generation of cellphones/smartphones there should be no reason, in the event one arrives late, why one cannot call first to explain the lateness. What’s even worse is to completely stand someone up.

7. Multiple Dates at the Same Time

I used to feel squeamish about this at first, but apparently lots of single people do “multiple date” at the same time. The awkward moment is when you’re on a date with one girl and run into the other girl during the same date. Don’t say it doesn’t happen.

This one is classic. Some won’t “hold” of a TV or even Internet. Some will look down on someone that doesn’t eat Cholov Yisroel or “has a past.” The other side too: considering the flying-saucer black hat/white shirt/funeral-black suits to be old fashioned, disdaining Yeshivishe phrases, etc.