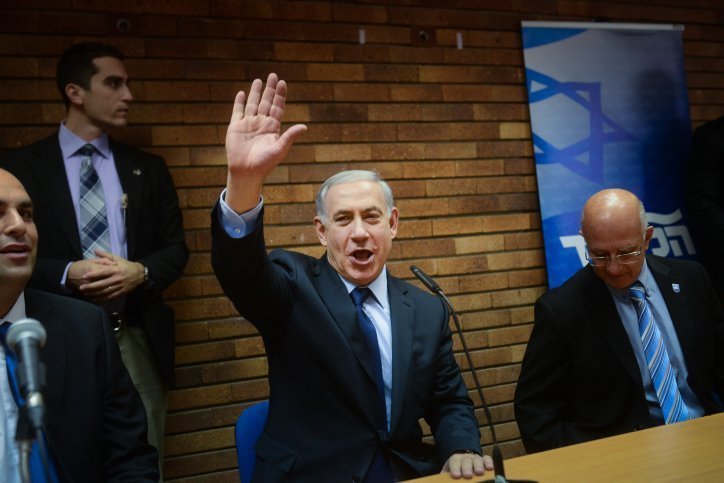 The Likud’s 96,000 registered party supporters also chose the party’s Knesset list. According to preliminary results, Knesset Speaker Yuli Edelstein, Interior Minister Gilad Erdan and Tourism Minister Yisrael Katz were neck and neck in the race for the second slot on the list, under Netanyahu. As of 8:30 a.m. only 25 percent of the ballots were tallied. The final list will be published Thursday afternoon. 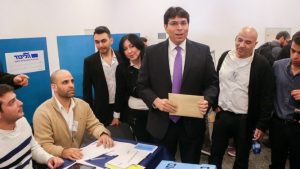 Danon, who came in fifth in the last primaries, did not break into the top 10.

Netanyahu confidants Tzachi Hanegbi and Intelligence Minister Yuval Steinitz, along with favorite Tzipi Hotovely, ranked lower than expected, with their exact slot numbers yet to be published.

Settler leader MK Moshe Feiglin did not win a realistic slot on the list, according to preliminary results that didn’t include ballots in the West Bank, where his power base lies.

Netanyahu is set to make a statement on the results at 11:00 a.m. local time.

Seventy candidates, including 17 MKs, ran in the party primary, vying for a slot giving them a realistic chance to serve in the 20th Knesset. 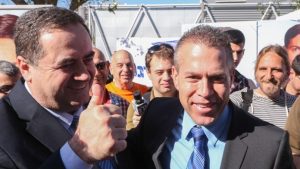 Prime Minister and head of the Likud party Benjamin Netanyahu casts his vote, together with his wife Sara Netanyahu, in the Likud primary elections on December 31, 2014. (Photo credit: Miriam Alster/Flash90)

Likud members also voted Wednesday on a decision by the party headquarters to allow the prime minister to hold open two slots on the Knesset slate, No. 11 and No. 23, for candidates personally appointed by him. By early Thursday morning, it seemed that the majority favored the decision.

According to estimates, 55% of registered Likud members cast their ballots Wednesday. 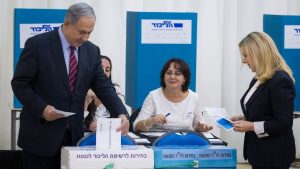 Prime Minister and head of the Likud party Benjamin Netanyahu casts his vote, together with his wife Sara Netanyahu, in the Likud primary elections on December 31, 2014. (Photo credit: Miriam Alster/Flash90)

Netanyahu voted at the polling station in the Jerusalem Convention Center with his wife, Sara. “These primaries will decide who will receive authority to lead Likud and safeguard the state,” he said. “We need a good list and I asked for the right to hold two slots. Likud is among the few factions that have democratic internal elections.”

Danon, speaking to Ynet on Wednesday morning, said that the primaries in Likud “were democracy at its finest. One hundred thousand people wake up to come to the ballot and make a stand. I am proud of my faction.”

Danon was fired by Netanyahu during the summer war between Israel and Hamas. In media appearances and in his public statements Danon consistently took a more hawkish stance than Netanyahu and overtly criticized his boss’s management of the campaign.

In several press conferences during the war, Netanyahu scolded dissenting voices from within the government who he said were harming the government’s position vis-a-vis Hamas and in the international arena. Danon was even featured in a Hamas propaganda clip as proof of what they called Netanyahu’s weakness and indecisiveness.

On Monday, the Likud comptroller cleared the way for Netanyahu to run in the primary after he was temporarily disqualified for conduct which the comptroller, Shai Galili, said was in violation of Israel’s Party Law.

Netanyahu was instructed by the top court of Likud to dismiss three of his advisers, who also hold positions in the management of the party, until Wednesday at midnight, as a condition for allowing him to stand in the primary.