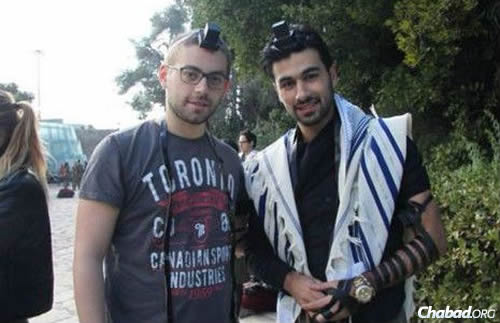 Yoav Hattab, right, with a friend.

By the Grace of G-d

The past few days, I felt the love of the entire Jewish people. I felt the heavy mourning that descended upon us all with the gruesome murder of Yoav, who was killed together with Yohan, François-Michel and Philippe at the hands of terrorists.

This love touched our hearts deeply, and I feel the need to put to paper my feelings and share them with you. What can I write about Yoav—a charming young man, the love of my heart—who was snatched from us so suddenly? Dear Yoav, you left us a gaping hole, an oozing wound in our hearts that will never be healed. On Friday afternoon, we got the awful phone call from Paris. We were told that a terrorist had taken over the Hyper Cacher supermarket, and that our Yoav was inside. There were rumors that a number of people had been killed struggling with the terrorist.

In tears, I told the people I was with that I am sure Yoav was among them. Because Yoav was not one to stand by quietly watching a terrorist try to kill people. I knew that he would fight; I knew he would do everything in his power to stop the savagery, even if it meant putting his own life on the line.

A few hours later, my instincts were tragically proven right. Shortly after the terrorist had entered the store, Yoav took one of his weapons and tried to shoot him. The gun jammed, and the terrorist shot him dead on the spot.

Yoav’s soul ascended on high, directly to paradise, to be with all the righteous people, together with the other martyrs who gave their lives to sanctify G-d’s name.

Yoav grew up in a home steeped in education. Our family has the great merit to continue the mission of Rabbi Nissan Pinson, may his memory be a blessing, and his life’s partner, may she live and be well, Rachel, who were sent by theRebbe—Rabbi Menachem M. Schneerson, of righteous memory—to Tunis to breathe life into the Jewish community and to found educational institutions.

Even in the hardest times of our community in Tunis, the Rebbe gave us great encouragement, and Yoav soaked in the spirit of joy and care, and made them part of his own life.

Yoav was a great student. But even more than that, he was devoted to the service of G-d and overflowed with love for his fellow Jews. He was filled with concern and love for everyone, helping others at every possible opportunity. 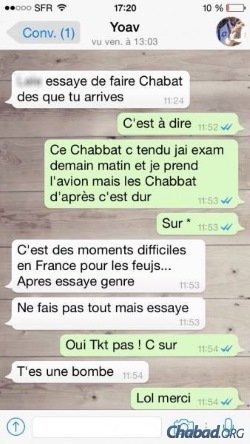 Yoav Hattab sent this last SMS last Friday just before entering the Hyper Cacher supermarket, where he was shot and killed.

Yoav was blessed with a sweet voice. He was a cantor and Torah reader, whose songs and prayers were a pleasure to listen to. He would pray and read the Torah with his whole heart—and his voice touched everyone.

And he didn’t utilize his gifts only for himself: He regularly prepared children for their bar mitzvahs, teaching them in the evening after long days at work, doing so at no charge. And quietly, without any fanfare, he also gave a lot of charity.

Yoav will be sorely missed by his family, who love him so much, but almost equally by his friends, to whom he was always so devoted and helpful.

Yoav had a special love for Shabbat. He would prepare for Shabbat, buying the best foods and preparing them himself. Before Shabbat, he would bathe and apply fragrance, like a groom for a bride, and then proceed to synagogue, where he would lead services.

He would rise early on Shabbat morning to study the weekly Torah portion. Even in his last moments, he was on his way to purchase special foods with which to honor his beloved Shabbat.

He never missed a day of donning tefillin. And he had regular times to learn Torah with a rabbi in his community, who invited him to a special session they spent together in the morning of that tumultuous Friday a week ago.

Yoav was meticulous about keeping the mitzvot, including the command tohonor one’s parents. Simultaneously, he was always encouraging his friends to add one more mitzvah, and then another one. In the last SMS conversation he had, only minutes before entering Hyper Cacher, he urged his friend to increase his observance of Shabbat. He wrote, “This is a difficult time in France for Jews … try at least to do something [in observance of Shabbat].”

That was our beloved Yoav.

The past few days, we received so much love and support from the Jewish people. Thousands of individuals who never even met Yoav came to his funeral to comfort us and share our grief. This touched our hearts deeply.

If I can make one request, it would be to continue Yoav’s embrace of life, to perpetuate it, to be infected by his love and to try to love the Jewish people even more. And, like Yoav, to encourage everyone you know to increase inmitzvahs for the merit of his soul and the souls of his fellow victims, Yohan, Philippe and François-Michel.

Your good deeds will continue their lives, which were abruptly cut short. This is what Yoav loved, and now, from paradise, he is looking down together with his fellow victims and taking pleasure in the sight of us continuing his way, adding good deeds and encouraging others to do the same.

I’d like to ask specifically that all add in honoring the Shabbat queen, who was so dear to our son. Even if you do not yet feel ready to keep the entire Shabbat, try to keep it at least partially. Light the Shabbat candles, hold a Shabbat mealwith your family, attend prayers at synagogue—and when you hear the sweet voice of the cantor, please remember the sweet voice of our dear Yoav, the voice that is singing in heaven for all the righteous souls, “Let us sing before G-d!” It would be particularly touching to do this now, while still in the shivamourning period for the departed.

Our Yoav, please pray to the Master of the World that He put an end to all our people’s suffering, that he send us Moshiach, and that we once again see you and hug you.

We love you very much and will always be thinking of you.