Connecting to Hashem by Taking Notice of Nature 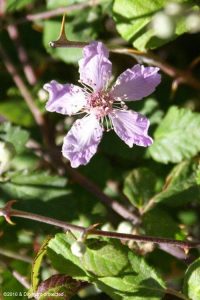 Much is taught about the ‘Burning Bush,’ and how Hashem revealed Himself to Moshe in the wilderness of Sinai while he was shepherding Yitro’s flock. Actually, the Hebrew word for bush סְּנֶה/s’neh shares the same root as Sinai, where Moshe later would ascend to receive the Torah. Hashem selected this desolate dry place in the wilderness for Moshe’s very first prophesy. G-d revealed Himself gradually to Moshe in order not to blind him from so much unexpected light in one go. First, He showed him an unusual sight, a bush that was aflame but not burning up. Inside of the heart of the flame, an angel of Hashem appeared to Moshe (Shemot 3:2). It was only after Moshe noticed and turned to see why the bush was not consumed (ibid. 3), that “Hashem appeared because he turned to see…” (Ibid 4). Hashem’s prophecy to Moshe was in response of Moshe’s taking notice of the nature surrounding him and asking questions, going closer to try to understand what he saw. How often do we completely ignore amazing sights happening right under our noses, as we walk around with our smartphones, our faces deeply buried in Facebook. If we want prophecy or even just a glimmer of a connection with Hashem, we need to lift our head out of oblivion to the nature around us and begin to open our eyes and ask questions about what we see!

Hashem’s Comforting Presence Within our Pain
Ironically enough even as I myself write this, I interrupted my writing to have a little chat via Facebook with a friend who was in need of chizuk (strengthening). During the Egyptian exile, the Jewish people were in need of encouragement and chizuk as we are today. From time immemorial, our souls are always burning from the fire of trouble surrounding us from all sides. According to nature, we would expect that the Jewish people would succumb and be consumed by our numerous troubles. Yet, we continue to withstand all of our enemies. This is one of the metaphors of the burning bush, which was “Once a heathen asked Rabbi Yehoshua ben Korcha, ‘Why did your G-d appear to Moshe in such a lowly type of bush?’ The Rabbi answered him, ‘If it had been a carob tree or a sycamore, would you not have asked the same question? But, I will answer you. Why in a thorn bush? To teach us there is no place where the Divine Presence is not to be found, even in a lowly bush” (Midrash Shemot Rabbah 2:5). It was specifically in the midst of the burning bush that Hashem’s presence was found. This teaches us that within the hardships that we go through, that is exactly where we will find Hashem’s comforting presence. “Then the angel of Hashem appeared unto him (Moshe) in a flame of fire out of the midst of a bush; and he looked and, behold, the bush was burned with fire, and the bush was not consumed” (Shemot 3:2). Whatever, our troubles may be, they exist to help us find and reconnect with that comforting Presence in an even deeper way. Once we learn to turn inwards to the midst of our thorny pain, then it can melt away in the warmth of our renewed connection with the Eternal inner love. At that point, we realize that our happiness is not dependent on removing all the things that cause us pain. These are all external, and what really matters is our internal connection with the Divine.

Which kind of Plant was the Burning Bush?
In the Written Torah there is not much information for identifying the burning bush. However, our rabbis during Talmudic times were acquainted with this kind of bush. The Midrash teaches us that it was commonly used as a garden hedge and grew under different types of conditions. “Just as this bush grew by the water, so does Israel only grow in the merit of the Torah, which is called water. Just as this bush grew both in gardens and at rivers, so does Israel live in both this and the coming world. Just as this bush produces both thorns and roses, so are there both wicked and righteous people among the Jewish people. Just as this bush had thorns that curved inwards in such a way that when a person inserts his hand into it, he is unscathed, but when he withdraws it, it lacerates him. Likewise, when Israel went down to Egypt, they were unknown, but when they emerged out, they became known by the signs and wonders of the plagues. Just as this bush has five petals that emerge from one point so is Israel redeemed in the merit of Avraham, Yitzchak, Ya’acov, Moshe and Aharon” (Midrash Shemot Rabah 2:5). The Jerusalem Talmud (Ma’aserot 3a) tells us that the bush produced a berry that was at first red and then turned black. All of this point to the correct identification of the s’neh by the monks of St. Catherine in Sinai as the Rubus Sanctus (Louis I. Rabinowitz, Torah and Flora, Chapter 13). I found further support for this in Rav Shimon of Shantz commentary on Babylonian Talmud, Zeraim 46a. He explains that the berries of the burning bush are hairy when unripe. This concurs with botanical descriptions of Rubus Sanctus, also called Palestinian Blackberry. Additional features described by the Midrash are, likewise, botanically verified: “…Petals usually 5, rarely more, occasionally absent, white, pink, or red, or hairy…” (http://zipcodezoo.com/Plants/R/Rubus_sanctus/).

Healing Israel’s Wound of Exile
The greatest healing in the world is the healing of compassion. Our wounds begin to heal when we feel that a friend shares our pain. G-d is the greatest healer. He precedes the healing to the wound. This is why Yocheved, the mother of Moshe, our redeemer, was born before going down into the wound of Egypt (Ramchal, Bereishit). “I will go down and save them from Egypt” (Shemot3:8). G-d left every mountain and dwelled inside of the lowly bramble bush as it states, “G-d called him from within the bush” (Ibid. 4). Hashem went down to the troublesome and sharp bush, filled with all kinds of thorns” (Midrash Pirkei Hayeridot 2). This is because, “when Israel went down to Egypt, the Shechina went down with them. Pay attention to the Creator’s compassion. All of Israel’s pain causes Him pain as it states, ‘In all their affliction He was afflicted’” (Yesha’yahu 63:9), Batei Midrashot, 2, Mechilta Parashat Shemot).

The Wound Healing Properties of the Bramble
I’m so excited to discover the connection between the spiritual/emotional healing that took place at the burning bush, and the medicinal properties of Rubus Sanctus. Just as Hashem came to down to the burning bush to heal Israel’s wound of exile, young bramble shoots have been used for healing of wounds and infected insect bites in folk medicine for ages. Scientific research was done to evaluate the wound healing activity of Rubus Sanctus. Rubus Sanctus Schreber aerial parts were collected from Kıbrısköy village, Ankara, Turkey during June to July 2007. Remarkable wound healing activity was observed with the ointment formulation of the methanol extract at 1% concentration. In conclusion, the present study demonstrated that the aerial parts of R. sanctus promote wound healing activity in animal as a preclinical study. The methanolic extract showed remarkable wound healing activity and it may be suggested for treating various types’ wounds in animal and human beings (http://www.ncbi.nlm.nih.gov/pmc/articles/PMC3139958/).

Just as there is medicinal healing properties for wounds within the bristly burning bush, so can we find healing for our painful challenges of life, specifically within the heart of our pain. Perhaps this principle is also alluded to by the fact that Rubus Sanctus contain both thorns and delicious berries. When we find Hashem’s compassionate presence within our affliction, then the thorns of our troubles make way for the sweetest berries of faith.

With credit to: Midreshet B’erot Bat Ayin Holistic Torah for Women on the Land www.berotbatayin.org