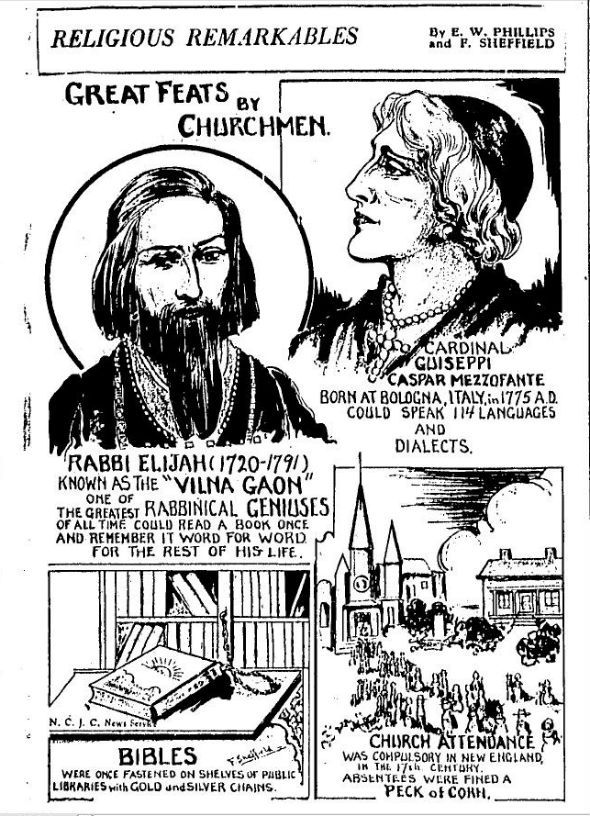 This is from page 2 of the Camden News of Camden, Arkansas Saturday, May 15, 1937.
Since someone is going to joke that the Vilna Gaon is not wearing a yarmulke, but the Cardinal is – well, I already beat you to it.
I suppose the authors of this cartoon were aware of the Gra’s comment to Orach Chaim 8:2 that אין איסור כלל בראש מגולה לעולם רק לפני הגדולים. The thing is, they knew he was a gaon but they didn’t know he was also a chassid; אסור להוציא הזכרה בראש מגולה ג”כ מדת חסידות הוא. Or that he was also one of the gedolim, I guess.
(Yes, Ripley’s Believe It Or Not did run something on the Gaon in the 1920s – perhaps 1929 – and yes, this cartoon is probably inspired by it. The reader who knows who he is should know that I still haven’t found the original Ripley’s, but I will. The text is easily available though, and went something like this:

The Mental Marvel, Elijah, the Gaon, chief Rabbi of Lithuania, possessed such a prodigal memory that he never forgot a book once he read it. Prof. Graetz, noted contemporary historian, states that the Gaon committed to memory 2500 volumes. He knew by heart the Bible, Midrash, Mekilta, Sifre, Tosefta, Seder Olam, the Talmud, the Zohar, the Code, Rashi, Rambam and many other religious texts and could quote any passage at will.

I’m not 100% sure this is exactly the original text, but we’ll know when we know. I also didn’t try to find the source misunderstood in Graetz. My tentative guess is that the number 2500 refers to roughly the number of pages in the Tamud Bavli. I once read an interesting thing about how Ripley ‘s researcher – yes, he had a researcher – sat in the NYPL and read all day.) 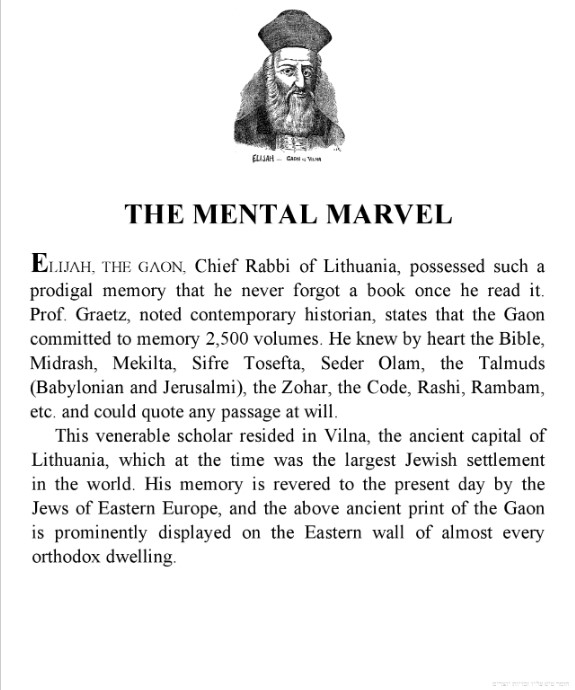 Rabbi Elijah, the Gaon of Vilna and his Cousinhood
The Family ancestry and progeny

Rabbi Elijah of Vilna was Lithuania’s greatest Talmudic scholar and one of
Judaism’s greatest spiritual and intellectual leaders of modern times.
October 20th, 1997 marked the 200th anniversary of his death on the 19th
Tishrei, 5558 (during the Festival of Sukkot).
He was, because of his fame, known simply as The Vilna Gaon (Genius of Vilna)
or HaGra (HaGaon Rav Eliyahu). His brilliance extended to mathematics,
geometry, astronomy and other sciences. His fame as a “Mental Marvel” even
gained him entry into the pages of Ripley’s Believe It Or Not!© in 1929.
In honor of his memory, this unique, hard cover, illustrated, large format book
is being published by the well-known rabbinical genealogical researcher and
published author, Dr. Neil Rosenstein, director of The Computer Center for
Jewish Genealogy. The total number of pages exceeds 440.
The book includes 100 genealogical charts, many extending over several pages,
and narrative texts including contributions by family members and researchers.
Also included are numerous reproduced documents and photographs as well as
various traditional portraits of the Vilna Gaon himself. The surname index
includes over 1,800 entries.
These charts trace his ancestry and progeny, as well as those of his siblings
such as the famed Rabbi Abraham Ragoler, author of Ma’alot HaTorah (Virtues of
the Torah) and his Cousinhood, which includes many famous families in the
religious and secular Jewish world. The reader will discover family members
from all walks of life – both the usual Jewish professions including rabbis,
doctors, lawyers, teachers, college professors, as well as the unusual –
British knights, movie and vaudeville actors, founders of Columbia Pictures
Inc., radio broadcasters, farming pioneers, authors of religious and secular
books, creator of the first “Barbie doll” and his wife who was the model of
its facial features, and many others.

About the Computer Center for Jewish Genealogy
The Computer Center for Jewish Genealogy is active in furthering research in
Jewish genealogy.
Dr. Rosenstein, the Center’s Director, is the author of the acclaimed
genealogical work entitled The Unbroken Chain (1976, one volume;1990, two
volumes) – Biographical Sketches and Genealogy of Illustrious Jewish Families
from the 15th – 20th centuries. Dr. Rosenstein has also researched and
published other books on a variety of subjects as well as a CD-ROM index of
the obituaries of HaMagid, the first ever Hebrew weekly newspaper (1856-1903).
His 1984 computerized publication Latter Day Leaders, Sages and Scholars was
described as “the wave of the future” in the Encyclopedia Judaica Supplement
(1983-85) under COMPUTER AND GENEALOGY. He is listed in Marquis Who’s Who in
America, 52nd edition, 1997.

A 130ft. family tree of the Vilna Gaon and his siblings will be on display at
the Yeshiva University Museum, 2520 Amsterdam Avenue, New York, NY from
September 1997 through June 1998. An index of all the people on the tree will
be available at the museum. Call the museum for times and more details at
212-960-5390.

For I dipt into the future, far as the eye could see,
Saw the Vision of the world, and all the wonder that would be.
(From “Locksley Hall” by Alfred Lord Tennyson)