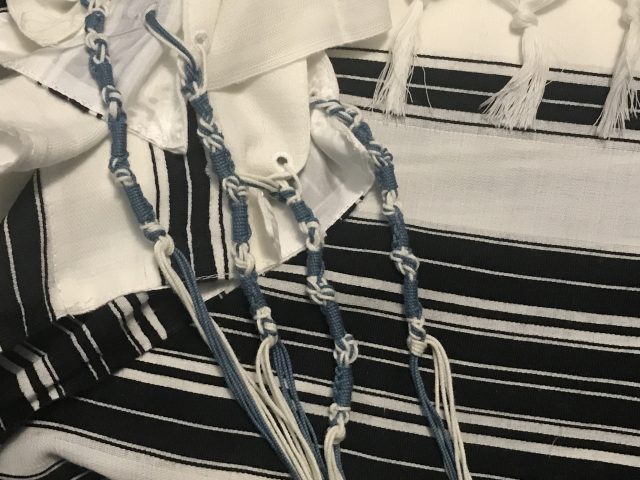 I’m having a question how to tie a Chabad Tallis Gadol and was wondering if you could help me out. On a Chabad Tallis Gadol there are 2 holes, one main hole where you put all the strings through and then a small hole on the edge of the Tallis to put the shamash through after you have tied the first knot (I believe it’s there to hold the strings in place). My problem is that I’m not sure which string to pull through the small hole – the white shamash or the blue shamash?
1) Place all four strings through the main hole.
2) Tie one single knot of 4 over 4 strings (i.e., the first knot of a double knot).
3) Take the white shamash and put it through small “shamash” hole (passing it from the back side of the talit through to the front).
4) Tie one single knot of 3 over 4 strings thus completing the initial double
knot but with the white shamash out of the second knot.
5) Now tie (according to the Chabad/Radzyn method) the first wrap using the white shamash – this wrap is a single wrap “knot” which serves to hold the tassel in place at the side of the talit, thus insuring that the tassel is always on the correct side of the talit and is “notef” off the side of the talit (as opposed to getting pulled around the corner and merely hanging straight down).

I originally tied the Tallis Gadol like this, but afterward untied it and retied it, looping the string through the wind after the second knot of the first double knot, which will be explained after. 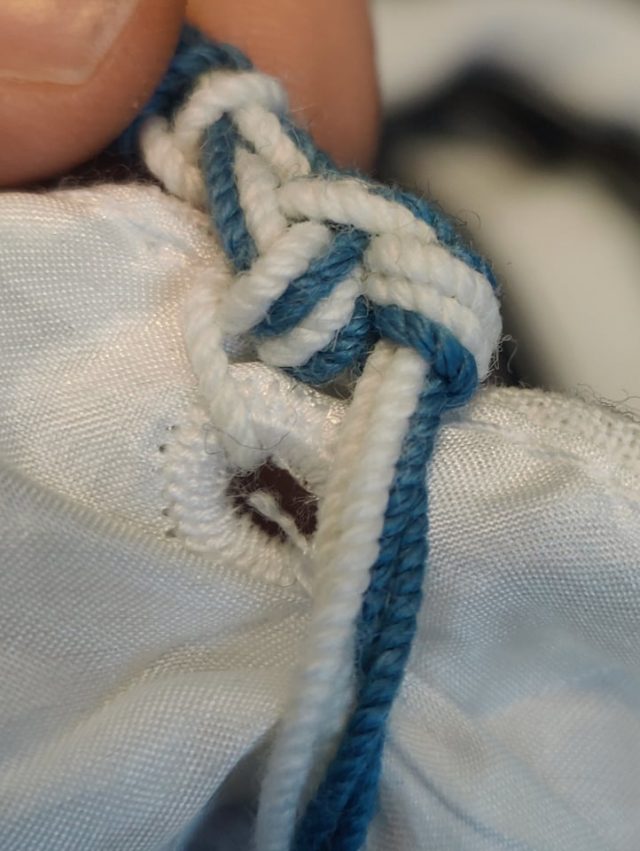 Origin of the Double Knot and Five Knots

The double knot has an interesting origin in that it’s well sourced. From Ptil’s website:

There is an argument as to the nature of the knots of the tzitzit. The Geonim (331 ’ גאוניקה ח”ב עמ ) hold that a knot can be one string tucked under itself. Rabbenu Tam ( מנחות לט. ד”ה לא ) compares the knots of tzitzit to knots in other laws like Shabbat, and therefore requires a double knot. According to Rabbenu Chananel, the knot is made by looping one string around the rest, whereas The Mordechai holds that all the strings are used (by looping four around the other four).

As for five knots there are numerous sources:

What’s interesting is that the above authorities all postdated Rabbeinu Chananel and all Geonim. Yet their gravitas is difficult to ignore.

How this Affects the Chabad Kesher Elyon

Which leads to the question about the Chabad Kesher Elyon instructions on Ptil’s website. To be clear: 99.9% of Chabad doesn’t wear Techeiles period. They take the words of the Rebbe Rashab very seriously, the last Lubavitcher Rebbe didn’t say anything about wearing Techeiles today (granted, Ptil came about in 1991 and the Rebbe had a stroke not long after), and some are scared off by the fact the Zohar writes that Techeiles represents Din (judgement). As a result, tying Techeiles on a Chabad Tallis Gadol wasn’t something they were yet privy to doing. Therefore, this was virgin territory for me.

To make matters even more confusing is that in Sefer Haminhagim – Minhagei Chabad (see picture)- it’s vague in that it only says it’s good advice to make a small hole to place a string after the first “Kesher Elyon” (top knot).

Is the Kesher Elyon only after two double knots or does the first single knot count as the first Kesher? 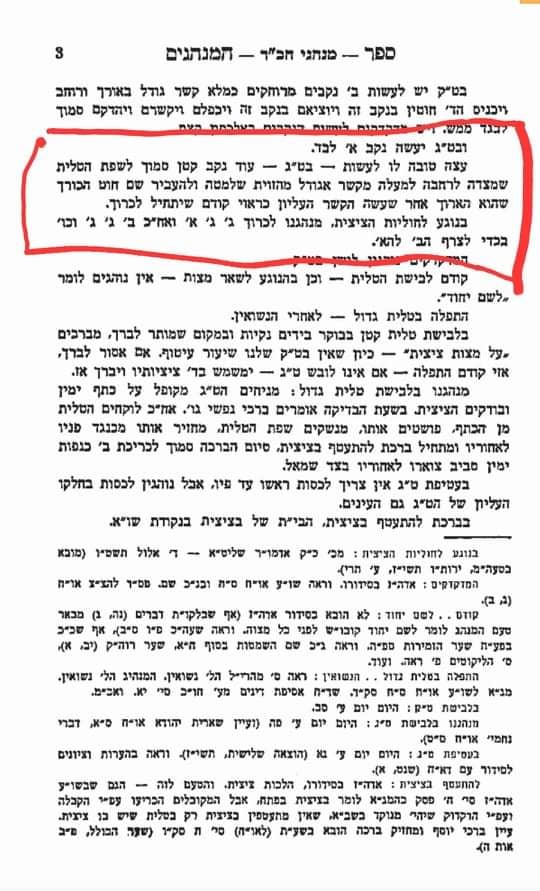 Chabad’s own website clarifies this as being after the first double knot:

“In each corner of the tallis gadol (Fig. 3), only one such hole is made. In addition (Fig. 4), it is advisable to make a small hole at the very edge of the garment’s width; its distance from the other adjoining edge of the garment should be slightly more than the length of the terminal joint of an average man’s thumb [i.e., slightly more than 3.5 cm.]. Through this hole the longest of the four strands is threaded after the above-mentioned [double] knot has been tied, and before one begins winding [it around the other threads].” 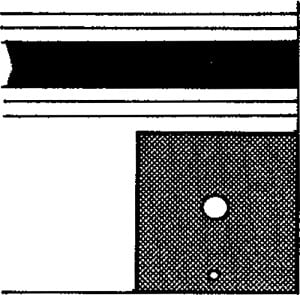 Furthermore, on the Shulchan Aruch HaRav website, it states:

B. How to tie the first knot by a Tallis Gadol that contains a side hole?[17]

The Chabad custom, as advised by Admur in the Siddur, is to make another small hole at the edge of the side of the width of the Tallis, which is above 4 cm from the bottom of the corner. [See previous Halacha!] The following is how this hole is to be used in the tying process: After properly making the first [double] knot[18], prior to beginning to make the loops, one inserts the long string which will be used to make the loops, through this hole. [One tightens this string until it is fastened onto the hole and hence secures that the first two knots will always remain above the 4 cm mark.[19] One then continues with the first set of loops.]

[17] Siddur Admur [18] The reason: As the Tzitzis must be tied to the exact dimensions of the corner, and the string that is placed through this hole is not 4-6 cm from the bottom in both width and length, thus Admur states to place the string into the side hole only after making the two knots in the proper dimensions of the corner. [Shiureiy Torah p. 373] [19] If one leaves this string loose, then it is possible, especially with the passing of time, for the first set of knots to fall below the 4 cm mark. It is therefore imperative to tighten the string in a way that it will not allow the first knot to fall below the 4 cm mark.

That said, it appears that Bedieved having a Tallis tied with only seven strings at the second single knot is kosher. On Shulchan Aruch Harav’s website:

What is the law if one placed the long string in the small hole of the Tallis Gadol prior to tying the first two knots?

If one entered the string into the main corner hole, and then entered it into the side hole prior to making the first two knots, one is to undo the Tzitzis and retie them properly.[27] However, some Poskim[28] are lenient and rule this may be done even initially, and that this was the custom in previous times, and certainly it is valid Bedieved.

One placed the long string only in the small hole: If one initially entered the Shamash [or any of the 4 strings] into the small side hole of the Tallis Gadol, and did not enter it at all into the main inner hole, then one is to undo the Tzitzis and retie it properly. One is to avoid wearing the Tzitzis, and certainly is not to wear the Tzitzis with a blessing, until it is fixed.[29]

[27] Shiureiy Torah p. 373 based on Admur in Siddur; Zichronos of HaRav Yaakov Landau, that so he was told by the Rebbe Rashab; See Siddur Rav Raskin p. 40; Harav Eliyahu Landa Shlita told me as follows: The Rebbe Rashab once gave his Tallis to someone to tie its Tzitzis onto it and that person entered the Shamash into the side hole prior to the two knots being made. The Rebbe Rashab gave the Tallis to Harav Yaakov Landa and asked him to undo it and retie it.

The reason: As the strings are required to be tied to the proper dimensions of the corner, as written in Chapter 3 Halacha 11, and according to Admur in the Siddur [see chapter 3 Halacha 11F] the two holes of the Tallis Katan must be made within the proper corner dimensions. Thus, in this case as well that the string was accidently placed through the side hole which is outside the corner dimensions, one is required to remove them and replace them. [Shiureiy Torah ibid] [28] P”M 11 brought in Biur Halacha 11/9 “Yaaseh”; Chazon Ish 3/12; Implication of Poskim in Shulchan Aruch who omit the above requirement; Piskeiy Teshuvos 11/21; See also Siddur Admur that in the times of the Gemara the single hole was made on the side of the Tallis.

The reason: As it is not necessary to make both holes specifically in the legal corner dimensions, and rather only the more inner hole, or top hole, must be within this dimension. They rule the knot is to even initially be made on the most outer hole. [ibid] [29] See chapter 3 Halacha 11A!

This is an important detail since I asked a number of Chabadniks/Rabbis and received different answers – a surprising number were actually confused about this matter! The majority consensus though appears to loop the Shamash after the second single knot of the first double knot.

I hope this clarifies matters in the event more in Chabad wish to wear Techeiles, which is touted as one of the signs of the pending Geula.