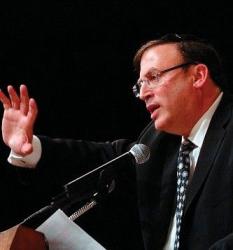 I once heard this a couple of years ago in a Shiur delivered by Rabbi Zechariah Wallerstein:

One time, Reb Zusia of Anipole and Reb Elimelech of Lizhensk were both sitting in jail for some anti-semitic related crime. They shared the same cell, along with dozens of non-Jewish criminals. In that jail, the way the inmates “did their business” was in a single waste pail that was emptied, only once it was full of human waste. R’ Zusia and R’ Elimelech were in a quandary. They weren’t able to study Torah in the presence of that waste!

Reb Elimelech soon realized, and he too was ecstatic. Both he and Reb Zusia soon started dancing around the jail cell in the presence of the other inmates. In the middle of the dancing, they picked up the waste pail, full of waste, and danced while holding it!

The non-Jewish inmates didn’t know what to make of the whole incident. All they saw were two Rabbis speaking Yiddish to one another, a language they didn’t understand. But soon, they reasoned that, okay, these two Jews are dancing with the human waste pail. The non-Jews learned something about some Jews in the desert worshiping the god Baal Peor by excrementing on the idol. Therefore, perhaps Baal Peor, the poop-god, is saving these two Jews. If the non-Jews dance with these two crazy Jews, maybe Baal Peor will save them too!

Suffice to say, the entire cell started making a Simcha which revolved around two Jews and a pail of human waste. With the noise reaching such heights, the prison warden arrived and asked what was going on. When the non-Jews explained their rationale, the warden, himself an ignorant anti-semite, thought to himself, “So, this is the Jewish god? The excrement? I will make an example out of them!” He told the non-Jewish inmates that from then on, as soon as there was a little bit of human waste, give him the waste basket for him to empty! “That’ll teach them,” he thought.

As soon as the warden took the pail, Reb Elimelech said, “Look Zusia, now we can learn Torah again!” And they danced around even more, in front of dozens of dumbfounded non-Jewish inmates.

← Bashert: Deserving of a “Patch”
Obama’s good for the Jews! →