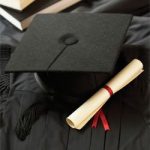 In 1972 Rav Moshe Feinstein was asked (Igros moshe YD 4:34) by a Rosh Yeshiva if he should allow his talmidim to go to college in the summer during Bein HaZmanim. Rav Moshe answered that going to college at all was not a simple matter. However we don’t protest it because many boys will not listen, either because they have too much parental pressure, or they need to go to college to be able to earn a living. There are also boys who aren’t learning Torah anyway. Regardless of the justification, says Rav Moshe, it must be made clear to anyone going to college that it is not a simple matter.

Regarding going to college in the summer, says Rav Moshe, since there are women on campus who do not dress in modest attire, the Rosh Yeshiva should enforce an absolute ban on going. Many boys will claim that it is better for their learning since they can receive many more credits in a much shorter time and it will free up more learning time during the year. Their arguments should not be heeded, says Rav Moshe, and even if they are permitted to go during the year, they should not be allowed to go in the summer.

It seems that when Rav Moshe wrote this response in 1972 he was referring to mixed campuses only, as the issue was with Tzniyus. Touro at the time was in its infancy, and YU wasn’t nearly as recognized as it is today. Also, it really depends which Touro campus is being attended. Some campuses are mixed and some are not.