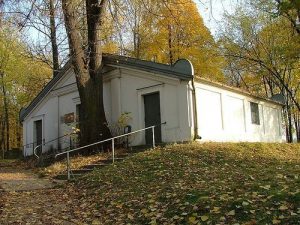 The Rebbe Reb Melech like many other great Rebbes in the early days of Chasidus was born into the non-chasidishe home, the son of a very successful businessman and great Ba’al Tzedaka. While few details are available, it is know that the Rebbe Reb Melech was on the path to be a tremendous talmid chacham and a unique star in the non Chasdishe world that he emerged from. It was his brother Rav Zisha of Anipoli, whose personality lent itself to a far great degree to the lofty spirituality of Chasidus, who after finding chasidus himself brought the Rebbe Reb Melech to Mezritch to the Magid with whom he himself became attached to. The Rebbe Rev Melech and his brother Rav Zisha also became very close to the other famous brother’s who were talmidim of the Magid, Reb Shmelke MiNicholsburg and his brother Rav Pinchos Horowitz the Ba’al HaFla’ah and Rebbi of the Chasam Sofer.

Reb Elimelech eventually succeeded the Magid a the leader of the Chasidim. While the role of the tzadik as the leader and conduit of Bracha was always one of the basic tenets of the Chasidus, the Rebbe Reb Melech made it into the main foundation of the entire movement. Accepting kvitlach and tzedaka for “Pidyon” also emerged as standard practice. The tzadik became the focal point of all spiritual and material needs.

The Rebbe Reb Melech had many great talmidim who started dynasties in their own right, with the Chozeh of Lublin taking the mantle of preeminent leader. It is said that before he died he divided up his great qualities among his various talmidim. The Chozeh received his spiritual vision, his heart went to the Kozhnitzer Magid, the neshama of his mind to Rav Mendele of Rimanov, and his power of speech to Rav Avrohom Yehoshua Heschel of Apta. Other famous talmidim included Rav Moshe Leib of Sassov and Rav Naftoli of Ropshitz.

The Rebbe Reb Melech was niftar on 21 Adar 5547/1787. He left a legacy in the two works published after his death, the Noam Elimelech and the Tzetel Katan. He has also left a legacy of Chasidus that has not only survived despite the strong opposition in his day from the Vilna Gaon, but has thrived to become the beautiful part of Am Yisroel that it is today. Yehi Zichro Boruch! (see also Chasidic Masters by Rav Aryeh Kaplan)