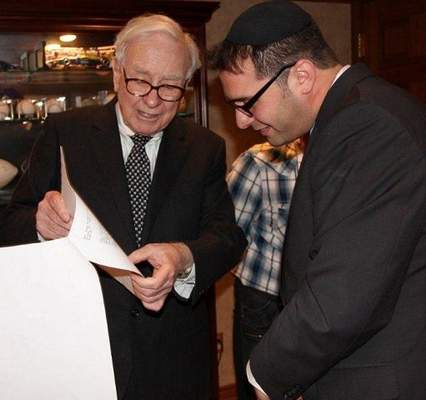 This past February at his offices, Warren Buffett showed Rabbi Jonathan Gross the contract signed with Rose Blumkin to purchase the Nebraska Furniture Mart.

This article was courtesy of Omaha.com.

It might be his best deal yet.
Warren Buffett got a bottle of Scotch, a loaf of traditional Jewish bread, a bag of Cheetos and the rights to the food in three large drums and a box.
All for free.
For thousands of years, Jewish people have sold their leavened goods — anything containing grain that rises when baked — to non-Jewish friends before the eight-day observance of Passover begins. Any unsold leavened products are donated to charity.
Jewish law forbids eating or having leavened goods during Passover, which celebrates the Exodus of the ancient Israelites from Egypt after being freed from slavery.
Rabbi Jonathan Gross of the Beth Israel Synagogue in west Omaha had an idea. He would ask Omaha investor Buffett — an 81-year-old agnostic and the third-richest man in the world — to take part in the “Sale of Chametz.”
Gross typed up a letter.
He included a little background on how the sale would work: Buffett would buy the goods, Gross would buy them back later.
“Price is low before Passover. Price is high afterward,” Gross said. “It’s a great short-term investment. So who would really appreciate this better than Warren Buffett?”
Gross also included the name of his friend Rabbi Myer Kripke, for whom the Kripke Center for the Study of Religion & Society at Creighton University is named. Kripke has been friends with Buffett for 50 years, since they were neighbors in Dundee.
A few days later, Gross got an email from Debbie Bosanek, Buffett’s longtime secretary, saying Buffett liked the idea.
“The beauty of being an agnostic is that you are in no position to make any judgment about anything,” Buffett said in an interview. “You can join in on anything.”
He said he decided to participate because it’s “a ceremony of enormous importance to Jews.”
One problem: Passover begins at sunset on April 6, and Jews regularly sell their leavened goods just one day ahead of the observance. Because of his schedule, Buffett wanted to meet Feb. 23 — six weeks before Passover.
Gross decided that he couldn’t actually sell Buffett his boxes of goods under Jewish tradition. “The sale is real, not a joke,” Gross said.
He called a mentor rabbi. Scratch the official sale, the mentor advised.
Gross decided to keep the meeting with Buffett, because he wanted to raise awareness about the need for donations to the Food Bank for the Heartland.
During the afternoon of Feb. 23, Gross packed up the goods and his meeting script — he didn’t want to waste any of Buffett’s time. He picked up Yossi Stern, Kripke’s son-in-law, and Rabbi Kripke, who at age 98 uses a wheelchair.
At Berkshire Hathaway’s offices in the Kiewit Plaza near 36th and Farnam Streets, Buffett showed the men around his 14th-floor office.
They saw his signed Shaquille O’Neal sneakers and shelves of Husker memorabilia.
“It’s really very ordinary,” Gross said of Buffett’s office.
In a nod to the ceremonial sale, Gross gave Buffett four 50-cent pieces to finance the deal.
Gross gave him a bottle of single-malt Scotch, home-baked challah — traditional braided Jewish bread — and Buffett’s favorite, a bag of Cheetos.
Gross also handed him two sets of keys — to Beth Israel Synagogue and to Gross’ west Omaha home, where the box and drums of food are kept. (Buffett agreed to donate the food to the food bank.)
The Oracle of Omaha and the west Omaha rabbi shook hands, no signed agreement needed.
Buffett returned the 50-cent coins.
He joked that now that he knows the asking price — four coins — he’ll bargain down to two coins next year.
“Why didn’t anyone tell me about this earlier? This is a great investment,” Buffett said. “I could have been doing this for years.”
Contact the writer:
402-444-1074, jonathon.braden@owh.com
twitter.com/jonathonbraden