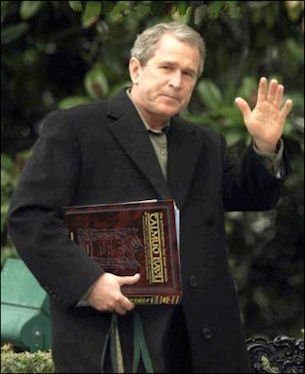 Jews have long been accused of studying anti-Christian texts supposedly contained in the Talmud. Such allegations have been made for so many centuries that even some civilized and fair-minded individuals accept them at face value.

Needless to say, the allegations are the staple fare of anti-Semitic organizations and websites. And it was because of such allegations that volumes of the Talmud often were burned, sometimes at the instigation of the Church.
But is there any truth to it?
As it turns out, every allegation about Talmudic anti-Christian texts is basedon the creative deconstruction of references to various sinners and alleging that these actually refer to Christian figures. The deconstruction operates even when the sinner in question has a completely different name, or no name.
(An invaluable resource on this subject is the webpage “Jesus in the Talmud,” by Rabbi Gil Student, at www.angelfire.com/mt/talmud/jesus.html.)
There are no explicit references to Christianity anywhere in the Talmud, nor to Jesus or Mary, though there are references to people who have names somewhat similar to theirs. There are mentions of several people named Yeshu (the traditional Hebrew name for Jesus), but these were people who lived in different eras, either long before Jesus or long afterward.
There is also a story about an immoral woman named Miriam, but again there is no reason why anyone should assume this is referring to the New Testament’s Mary. The names Miriam and Yeshu appear in the Jewish Bible, where they obviously do not refer to the Christian figures, and both names were evidently commonly used in the era of the Talmud.
The most lurid and common accusation involves a single passage in the Talmudic tractate Gittin, which generally focuses on laws of divorce. Anti-Semites claim the page describes Jesus in the Afterworld being punished by being boiled in excrement.
But Jesus is not mentioned there, nor is anyone with a name resembling that of Jesus. What actually is on the page is a long discussion of legends concerning Roman emperors, starting with Caesar and ending with Titus. The immoral behavior of Titus is discussed at length. The various indignities and punishments Titus suffered later in his life are described, with the presumption that these are divine retributions.
Having discussed Titus’s life at length, a relative of Titus is then discussed. The nephew of Titus was named Onkelos son of Kelonikos, and he converted to Judaism, becoming one of the leading scholars of his age. One of the earliest translations of the Bible (into Aramaic) was undertaken by this same Onkelos and is still an indispensable tool for understanding the Bible.
In the Talmudic digression about the life of Onkelos, a story is cited to the effect that when he was at first contemplating converting from Roman paganism to Judaism but had not yet made up his mind, he conjured up his dead uncle, Titus, from the Afterworld. Titus describes his torments there to his nephew. Onkelos then conjures up two other dead sinners: one is the evil Balaam, who lived many centuries earlier, and the last is a nameless Jewish sinner who had mocked the teachings of the sages. Both are suffering torments in the Afterlife, with the last sinner being boiled in feces. The first two sinners advise Onkeles not to convert, while the last sinner advises him to embrace Judaism.
Anti-Semites claim, somewhat inconsistently, that Balaam in this page of the Talmud is a secret code word used to mock Jesus and also that the nameless Jewish sinner being discussed is Jesus. But of course they cannot both be referring to Jesus. Actually, neither is.
Balaam was never a Jewish code term for Jesus or Christianity. In later Jewish texts, when Jews living under Roman or Christian rule wished to criticize or protest the behavior of the rulers, they used “Edom” and the “descendents of Esau” as code for Romans or Christians. The nameless Jewish sinner included in the story is clearly added to illustrate the torment of a disrespectful Jew compared with the punishments doled out to pagan sinners.
In short, nothing here refers to Jesus or any other Christian figures.

Other segments of the Talmud cited by anti-Semites as “evidence” are even sillier.

In a different Talmudic portion there is a reference to a nameless immoral woman, a descendent of princes, who hung out with carpenters. Evidently because of the carpenter reference, anti-Semites claim this is referring to Mary. There are no Christian sources that claim Mary was descended from any princes. The woman in question is mentioned in the Talmud as someone who practiced sorcery like Balaam.
Anti-Semites claim the original text here, later removed by censors, named the woman “Miriam the Hairdresser.” Just why anyone would think a hairdresser descendent of princes was referring to the Mary of the New Testament is unclear.
One Yeshu discussed in the Talmud is the wayward pupil of a Rabbi Yehoshua Ben Perachiah, and they lived long before Jesus was born, spending much of their lives in Alexandria, Egypt. This Yeshu’s sin was that he made a comment about the eyes of a married woman. The Talmud elsewhere says that this Yeshu had close ties with the government. No one claims Jesus was politically well-connected with the Romans.
If this were some sort of Talmudic diatribe against Jesus, surely the sages involved could have come up with something better than disapproval of a comment made about a woman’s eyes. And from the biographical details, it is clear it could not be referring to the Jesus of Christianity.
A different Yeshu is mentioned in the Talmud as having five disciples, four of whom have names that do not resemble any of the disciples of Jesus, while one is named Matai, a common name that some claim resembles Matthew.
In other pages of the Talmud one can find references to a Son of Stada, who was a sinner executed on the eve of Passover in Lud after being judged by a Jewish court for sorcery. Anti-Semites have claimed this is a code reference to Jesus. But according to three of the four Gospels of the New Testament, Jesus was not executed on the eve of Passover but on Passover itself; the execution was not in Lud; his father was not Stada; he was judged by a Roman court and was not accused of sorcery; and the Son of Stada evidently lived a century after Jesus.
The Talmud cites a dissenting source which claims that Stada was actually the name of the mother of the Son of Stada, and that she left her husband to have an affair with a man named Pandira. This is the section where Stada is also referred to as the Hairdresser Miriam. The first husband of this hairdresser is discussed elsewhere in the Talmud and is known to have lived a century after Jesus. So none of this can be considered to be referring to Jesus.

The sages had their theological disagreements with Christianity, but these were not things they discussed in the Talmud. And while Christianity in its earliest phases was a minority movement of Jews who otherwise practiced Judaism, the rabbis who participated in the debates in the Talmud were preoccupied with other matters.

This article was copied from the Jewish Press.