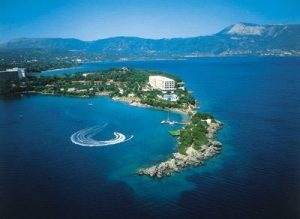 While Benjamin of Tudela (1170) found scarcely a single Jew on Corfu, this state of affairs changed when rulers of Naples from the House of Anjou brought in Jewish craftsmen from the Byzantine Empire. From this foundation there developed in the 15th and 16th century communities of Spanish, Sicilian, and Apulian Jews, who had to leave their homelands due to persecution. [Translator’s Note: Apulia is halfway up the Italian peninsula on the Adriatic Sea.] To this day they preserve their particular customs and rites.

Concerning how they spoke with each other, the Byzantine Jews quickly enough learned the dialect of the Apulian Jews who, on account of their frequent contact with Venice, took after the Venetian dialect. On Tisha B’Av, the Greek Jews dedicated themselves to reciting Lamentations in the Greek language. Until 1884, on Shavuot, a poem written in Greek, with rhymes, was recited. Famous Greek folk songs with Turkish words were sung on Rosh Chodesh Adar. The first full translation of the Bible into modern Greek was prepared for the Jews on Corfu.

Corfu is one of those lands in which Jews traditionally were known for crafts, trade, and various kinds of heavy manual labor. In the quaint little backstreets from the Middle Ages which were inhabited by Jews, one could find cabinet-makers, locksmiths, cobblers, coopers, blacksmiths, plumbers, and the like. Jewish barge pilots, stevedores and porters complete the picture of the Jewish economic life on Corfu.

There were also great merchants who were involved in export and lending; excellent doctors; and defense attorneys whom one could see practicing in the courts of law of the 17th century. Jewish soldiers fought bravely during the defense of the Turkish siege of 1716.

At the beginning of the 20th century there were 5,000 Jews on Corfu. The deteriorating economy caused a significant exodus in 1901, mainly to Alexandria, Triest, and Milan. In 1933 there were about 1,000 Jews left on Corfu.

The synagogue liturgy of the Jews of Corfu modeled itself after the Roman rite.  Handwritten prayer books can be found in the Bodleiana in Oxford, as well as in various public and private collections. The British Museum possesses handwritten liturgies and poems written in Greek and in the Apulian dialect which were written by the Jews of Corfu.

Corfu had a rabbinical authority named David ben Chaim Ha-Cohen, who had been a student of Yehuda Minz of Padua and who directed a Talmudical high school on his native island. Joseph Immanuel Levi (19th century) published the newspaper Mose. Joseph Nahamali translated the siddur and Pirkei Avotinto modern Greek and published the periodicals Chronica Israelitica andFamiglia Israelitica.

In 1899, the Greek-language “Israelitica Chronographos” was founded so that the Greeks could become acquainted with the world of Judaism. From Corfu came Lazar Belelli, who prepared a Hebrew-Greek lexicon of the Book of Genesis, and also Professor Darius Levi and the publisher Alexander Levi of Naples.

← Siyum HaShas 2012 – Personal Thoughts and Experiences
Letters in the Torah – Ben Asher Version – Which One is Right? →