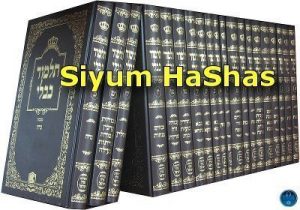 On August 21, 2012, Jews from around the world will be gathering in celebration of the completion of a 7.5 year cycle of the Siyum HaShas/Daf Yomi, the 12th ever. This certainly is a monumental accomplishment for those that actually completed it.

The whole concept is that any Jew, whether working or learning, can learn for 1 hour a day and theoretically complete all of Shas in 7.5 short years.

That said, while the idea has always been an ideal one, I wish to share my personal feelings about it’s practicality which I’ve held for some time. From personal experience, I made 2 attempts the last few years, once in Brooklyn and once in Toronto, in “doing the daf,” and each time left me disappointed. In each scenario, the typical Daf Yomi shiur was: a Rabbi running through the Daf (“you are supposed to prepare beforehand”), 4-5 guys sitting, 2-3 of them looking spaced out, at least one playing on an iPhone, and one LOOKING like he’s understanding, but keeping quiet. What made things worse was that on each occasion the Rabbi would refuse to answer questions and run out right afterwards.

During my first attempt, the Rabbi at a later time (after I dropped out of his program) confided with me that he agreed that it’s impossible to gain a full understanding of the Shas in just one hour a day, and that he was merely doing it since he was getting paid! In my second attempt, the person wasn’t making any money, and since time was money for him, he refused to stay. Needless to say, these Daf Yomi experiences have left a bad taste in my mouth.

I have been told that there is someone, somewhere, that is benefiting from this. But was the system meant to alienate the other 99% of people genuinely looking to complete Shas? Perhaps, since we are a much lower generation than our grandparents (Yeridas HaDoros), perhaps the Daf should be done in 2 hours, or have it spread over a 15 year span. Then again, in our instant-gratification society I know that will never work.

As for the Siyum HaShas, perhaps one should make a special section for the few that actually completed it and gained some understanding. Admittance would be based on a brief farher on topics that would never be covered in a Yeshiva, and that would show that these people actually “did the daf”. The ones with the highest scores get to go to the front. The rest would merely be supporters of those that did it.

I don’t know, but something has to give. I would much rather learn b’Chavrusa than in a Chabura or a Shiur, and even would benefit more from learning my own Sefarim myself at my own pace. The concept of this rush-rush mentality of doing a “daf a day” from someone who couldn’t care less turns me SO OFF!!! Nuts to that!

On the upside, thank Gd we have translated texts from Artscroll and Steinsaltz like never before!

Again, this is not to knock anyone who has “done the daf” and done it diligently. I just felt like, as the title says, sharing my own personal experiences and opinions, as where else can I do so?

← Top Ten Signs You’re in a Jewish Softball League
Before The Deluge: Jews Of The Mediterranean Islands (Part III) – Corfu →