The Zionist movement has a strong following in Shanghai. It manifests itself there via the monthly publication “Israel’s Messenger.”
In Tientsin arose a colony of Jews in the beginning of the 1920s; they developed a cadre of dealers in smoking materials in Harbin, who reestablished their enterprises there because the nationalization of these activities by the Soviet regime harmed their business there. 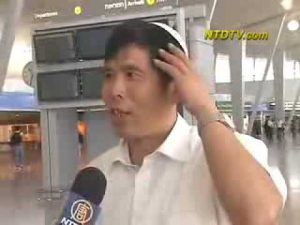 Retailers and artisans moved in, and in 1926 there lived in Tientsin about 400 families. A high school, a community club, and an aid society for those wandering through were founded. The Jewish settlements in Tsingtau, Tschifu, Wuhan, which was previously called Hankau, in Canton and Nanking, all find themselves in their beginnings. A further view is not possible now.
In 1932 the province of Manchukuo became independent of China and styled itself in 1934 as the Empire of Manchukuo. [Translator’s note: This badly states the true situation. In 1932, the Empire of Japan conquered Manchuria and renamed it Manchukuo. What is described above was nothing but a Japanese puppet state.] It consists of a surface of 1.5 million square kilometers and counts a population of 30 million. The capital of the new empire is Hsingking (the previous Tschang-tschun).
The biggest commercial and traffic center is Harbin, with a population of about 330,000. Harbin is the site of a Jewish community whose founding goes back to 1898. The first Jews came to Harbin as truckers of materials for the construction of the East China Railroad. During the Russo-Japanese War of 1904 there occurred a stronger immigration, and particularly after the Bolshevik Revolution there occurred an exodus from European Russia and Siberia.
For the masses of refugees Harbin was a way station to China, Japan, Canada, Australia, the Philippines, the Pacific islands, and particularly to Europe, and especially Germany. For the purpose of advising and assisting the refugees, the Central Jewish Information Bureau was founded, which in our days takes care of wandering Jews from Germany.
The Jewish community of Harbin experienced a rapid growth and in 1926 counted 18,000 Jews, with about 13,000 going back. [This doesn’t entirely make sense – to where did they go back? – but the active verb here is zurückzugehen, and I know of no other way to translate it.] They are almost entirely of Russian background. They speak Russian and Yiddish. The community established two synagogues, a library, a Talmud Torah, and also a home for the elderly and a hospital. There is a Russian-language newspaper devoted to Jewish interests.
In 1925 in Hsingking lived 50 Jewish families. In Mukden, a city of 250,000, there is a bigger community. In the port city of Darien the Jewish export firms of Harbin have branch settlements. Farther away Jews live in Chailar and Tsitsikar, in the north of the empire. When the Soviet Union sold the East China Railroad to Japan, it appears as a consequence to have caused an exodus of Jews.
Manchukuo is in the Japanese sphere of interest. New industries will serve the purposes of Japanese interests. Manchukuo has a well-developed agriculture which potentially could be developed even more, but at this time the (poor) purchasing power of the population causes low harvest prices. The introduction of agricultural machinery, at this present time, does not appear likely.
Attempts by Jewish doctors and dentists to establish a foothold in Manchukuo have not succeeded. Circumstances of course offer an advantage that preferential treatment cannot be demanded. [I believe this means Jews were not discriminated against for being Jews.]

Manchukuo is a new state that still needs to be consolidated before the possibilities of a regulated immigration can be foreseen.