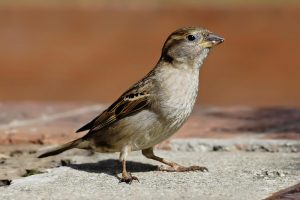 [A couple of months ago] there was a house sparrow in my house. (They call them house sparrows for a reason.) As hard as it tried, it just kept bumping into the walls, and couldn’t seem to figure out how to get to the open windows. Having raised birds in the past, I tried to catch it to put it out. The sparrow was afraid and kept fighting me and wouldn’t let me grab it.

Finally, after a long chase, I cornered the sparrow and caught it in my hand. The sparrow made a mournful tweet, as if to say, “I give up, eat me if you must!” and stopped struggling. I took it to the open window and opened my hand to release it. Instead of flying away, the bird just stood on my open hand and looked at me and made head motions, as if to say, “thank you for helping me (and not eating me)!” After about two minutes, it flew off to a nearby tree.

Sometimes in our lives, we, like the sparrow, are so scared of something, but after it actually happens we then realize that the seemingly terrible thing we were so scared of and dreading so terribly actually turns out to be a wonderful thing.

← BEFORE THE DELUGE: THE JEWS OF CHINA II
Can a ‘Lefty’ Rabbi Save Yeshivat Chovevei Torah? →