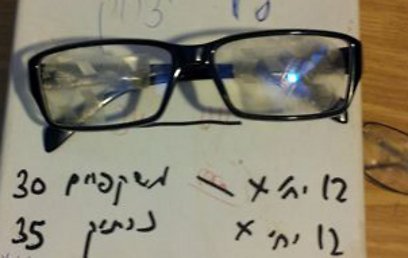 The next time you are in the silly world of Chelm you may notice the men wearing foggy glasses. No, it’s not because they can see better, the reality dear friends is so that they see worse! You will also notice the high number of traffic accidents. The two are actually very much connected.

It all happened many years ago when Yankel, the town Melamed went to the store to buy milk and eggs. On the way there he stopped at the bus station top wait for the bus to take him to the store. While he was sitting an attractive woman sat next to him. As nature intended, he was very attracted by her beauty but for modesty reasons he turned away from her. However, as the day wore on he couldn’t stop thinking about that woman. It was a very big problem indeed.

So big, in fact, that Yankel went straight to the Sage of Chelm. The Sage stroked his beard and told Yankel, “This is a very grave matter. To atone, you will need to walk for a week with peas in your shoes.”

So Yankel went home and put peas in his shoes. All of a sudden he found that he couldn’t walk. So, what did he, like a normal thinking Chelmisher, do? He took the peas out, cooked them and then placed them back in his shoes. The squishiness felt uncomfortable, but not enough for the next time he was attracted to a woman standing in line in front of him. So, Yankel went back to the Sage.

The Sage thought hard and long. After racking his brains for many hours, the old Sage told Yankel, “It’s clear that the problem has not to do with your feet, but with your eyes. Shield them from now on.”

“But wise Sage, how can I see where I am going?”

“Very simple,” the Sage told Yankel. The Sage then opened up his desk drawer, reached for one of his spare pairs of reading glasses, and smudged some soap on the lenses.

“Here, take this,” the Sage said, “put them on and you will be able to see wherever you go.”

Reb Yankel thanked the Sage profusely, placed the smudged reading glasses on his face and walked outside, but not before hitting the door head-first. He then saw a horse, and thinking that it was his friend Shmerel, greeted him. When he got the gruff response that a horse gives, he asked “why the long face?”

Others saw what was going on and thought that the idea was a good one, so they went ahead and bought smudged glasses at premium prices. That very week, traffic accidents increased exponentially. Men walked into cars, telephone poles, and each other. Some even started learning B’Chavrusa with horses! Meanwhile, the women were dying of laughter in light of what they saw going on.

So friends, the next time you visit Chelm, you will find that every male resident there wears glasses that he cannot see from.

← Kol Nidrei Tune: Where did it come from?
BEFORE THE DELUGE: THE JEWS OF IRAQ (PART II) →