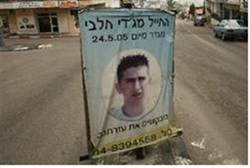 Released for publication: The remains of a body found in the Isfiya forest has been identified as that of IDF Private Majdi Halabi.

A day that began with a hike in the woods ended late last month with the sad discovery of human remains, and the knowledge that a seven-year search for IDF soldier Majdi Halabi had come to an end.

The Israeli civilian found the body not far from where the long-missing soldier was last seen near his home in Daliat al-Carmel, south of Haifa. Halabi went missing in 2005. He served at the Chimush base, near Tirat HaCarmel south of Haifa.

Identification was made at the Abu Kabir Forensic Institute using a DNA test, after which the soldier’s family was informed of his death. IDF Personnel Director General Orna Barbibai said this afternoon the soldier was the son of Fahima and Nazmi Halabi, who have endured additional tragedy: one year ago, they lost another son as well. Adam Halabi, Majdi’s brother, was killed in a road accident in the village where they family lives.

Private Halabi last was seen when he left home on May 24, 2005 to return to his base in Haifa. Only 19 years old at the time, he used an ATM machine, bought a can of soda and stood at the hitchhiker’s post in his village, where he was seen by a relative passing by.

His family received word from the IDF two days later that he was missing, and a full-scale search was launched. He was officially declared missing six days later, on May 30, 2005.

In 2007, the Born to Freedom Foundation offered a $10 million reward for information on Majdi’s whereabouts. In 2008 a prisoner claimed Majdi had been taken captive and was being held captive in the Palestinian Authority-controlled city of Shechem; however, police strongly doubted the authenticity of the report and it was never verified.

For years, the family conducted its own searches, in addition to those carried out by the IDF and police. Posters with his picture can be seen on the roads leading to the Druze town. Once a month, a police commander faithfully visited the family home to update them on the case, but until last month’s sad breakthrough they too had no clue as to Majdi’s whereabouts.

The IDF announced, Thursday evening, that Private Halabi will be laid to rest, Friday afternoon at 12:30, in the Ussafiya Cemetery.