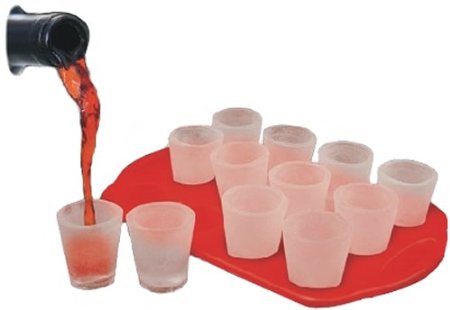 Chelm has always been known to be a village of fools. In Chelm, you might notice that the people there drink soda from shot glasses and schnapps from regular cups.

It all started like this. Once upon a time in Chelm, everyone drank soda from normal cups and schnapps from shot glasses. That is, until Yossel the fresser showed up in the middle of the street with a giant cup filled with his favorite soda.

Now, there was a huge obesity epidemic in the town. Yossel however was bigger than most people, and it seemed that his drinking tons of a high-sugar drink at once was the cause of it.

So, the mayor of Chelm, who was due for re-election but was very self-conscious about his own weight, decided to institute a law that would affect all Chelmites. He decided to make a rule where anyone possessing a drink over 20 oz. would be fined for each ounce over the limit. The logic was simple: More personal weight gain meant buying larger suits, which meant more money went to clothes and less money to campaign funding. The law was passed and, while there was a lot of initial protest, the resistance eventually died down.

However, the mayor wasn’t satisfied. Shortly afterward, he had a brief run-in with another highly obese person that he shared a carriage ride with. Once that happened, he blamed it on himself and then went back to reducing the size of the soda drinks, this time to 12 oz, and then again shortly thereafter to 6 oz, and then eventually the size of a shot glass.

That said, the makers of the plastic cups got angry as they were losing tons of sales as a result of these laws. When they approached the mayor, he decided to pass a new law: increase the size limit of plastic shot glasses. While weight gain due to sodas is one issue, it certainly doesn’t stand in the way of a L’Chaim!

With this decision, the plastic cap makers, the citizens and even the old Sage of Chelm marveled at the mayors’ wisdom!

← Sad News for Family of Missing Soldier: Majdi Halabi Found Dead
BEFORE THE DELUGE: THE JEWS OF SPAIN (PART II) →