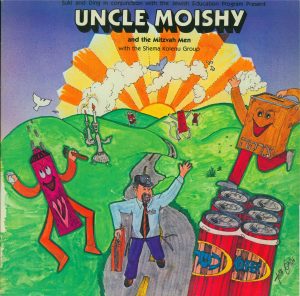 These are the lyrics to “Ain’t gonna work on Saturday.”

After Googling the song to death without any luck I Googled the best search engine – my wife. She recognized it as an Uncle Moishy song from the very first album – when it was on record! The song was called “Big Gedaliah Goomber.” No wonder I had a hard time searching for it – it was under a different name!

It’s also hard to find because it’s widespread in record format, though mostlymusic.com now sells it on CD.

Anyways, here are the mp3 songs:

Repeat chorus after each stanza.

I once helped raise a building
And on the hundredth floor
I was carrying a load of bricks
An easy ton or more
And her, it’s late on Friday
I knew I’d have to stop
So I yelled, “Watch out below!”
And let the whole thing drop

I once was an explorer
To Africa I went
One shabbos hungry lions
Came roaring round my tent
My assistant held my rifel
“Go Goomber shoot these pests.”
But I called them in instead
To be my shabbos guest

Once to split an atom
With effort I had learned

Here’s a clip from The Big Lebowski on not rolling on Shabbos. Disclaimer: due to the colorful language it’s recommended that this is not shown to children 🙂