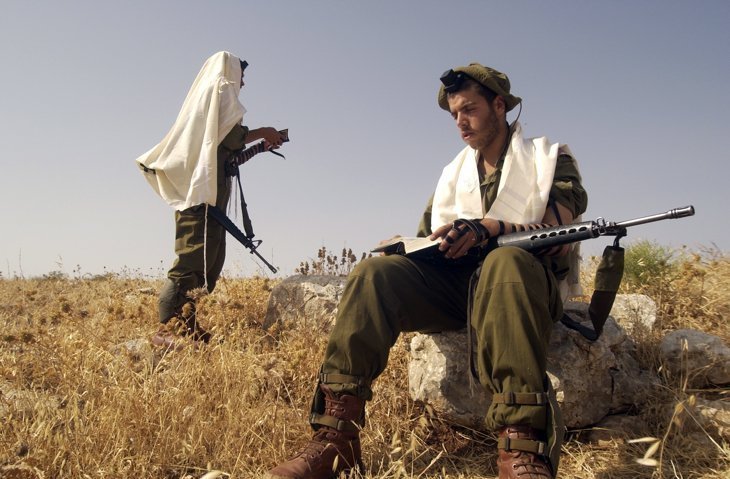 There’s been a huge brouhaha about the State of Israel enforcing mandatory military conscription for Haredi students. While there is reason to be concerned about Tal Law possibly being revoked, I don’t feel that this alone should be a reason to say Tehillim and mourn.

I can sort of see both sides to the argument. Sixty five years ago, Prime Minister David Ben Gurion (nee Gruen) gave the petur (exemption) to Haredim from serving in the army. Keep in mind though that in those days, Haredim were at a minimum while the rest of the state was filled with, with all due respect, Jewish Goyim. These were Jews that kept Torah and Mitzvot on a very limited superficial level, whatever each ones reasons were, but risked life and limb to defend a state that would allow freedoms to all Jews.

(On a lighter note, do you know which shul David ben Gurion went to on Yom Kippur? He didn’t go to shul, he went to the Beit HaKnesset 🙂 )

On a more serious note, though, over the last sixty five years the growth rate of Haredim has more than outnumbered  the growth rate of other Israelis. Bli Ayin Hara it’s not uncommon to see Haredi families of 10-15 children, though many of whom are poorly educated in terms of earning a Parnassa of quantifiable value to the Israeli economy. This has created a rift which puts many Haredim in a poor light, leeching off the economy. 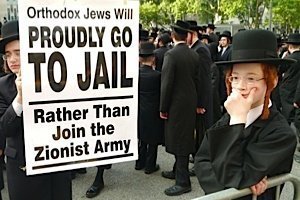 Photo courtesy of Yirmi Brenner of the Jewish Daily Forward

From the Haredi standpoint, I sort of see that point of view as well. While Israel needs physical power in soldiers, it also needs spiritual power in Torah scholars. The accusation by the uninformed secular population that Haredi students waste time is reason enough for Haredi Yeshivot in Israel to enforce rules that those of us outside of Israel would deem absolutely insane! Some of these rules include not being able to own a drivers license (may lead to driving and partying on the Yeshivas’ dime), not having internet access (wastes time, as well as brings in perceived impurities), and more. These are in reality meant to show the secular government that they are diligent, not wasting time, and can therefore not only save time from the army, but also continue getting government aid. That’s the real bottom line – money.

However, there are also problems with this. For one, especially in today’s generation not everybody is cut out for rigorous study. There was a time in Eastern Europe that only the best and brightest Masmidim married beautiful girls with rich fathers in law to support them in learning. This then expanded to fathers and tzedaka organizations to pool financial resources to support Yeshivas to do the investigative work for them (In Yeshivas Chofetz Chaim today alone, they reportedly take attendance 13 times a day – source: a personal email from a 45 year old Kollel guy), thereby leading to the Kollel situation today, for better or worse.

To add more fuel to the fire, there is a huge social pressure among Haredim, even among the unlearned, to not join the Army. Many feel that even with groups like Nahal Haredi, etc. the army is the beginning of the end for religious life as it’s known. In some cases this has led to parents cancelling Shidduch marriage proposals, and in some more extreme cases excommunication. A sizable number of people are being forced into sitting and at the very least looking like they are learning. And if they aren’t present all the time, their Kollel stipend gets drastically reduced while the wife works ten times as hard supporting her husband and children. On the flip side, the men become excellent housekeepers – sort of a reversal in roles.

That all having been said, there are some real scholars that deserve to learn Torah full-time and that cannot multi-task the stresses of Kollel with the stresses of the Army – it would be too much. 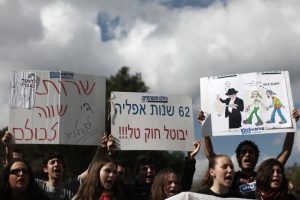 Young Israelis demonstrating outside the Prime Minister’s Office in Jerusalem on Sunday, Jan 29, 2012 in protest of the plan to extend the Tal Law which exempts yeshiva students of IDF service. Photo by Kobi Gideon / Flash90 *** Local Caption. Photo courtesy of http://www.jta.org

Now, from the secular standpoint, there are many reasons why they hate Haredim not serving in the army. A recent article in the Jewish Press laid out 12 very good reasons why seculars reject Haredim. In addition to the perceived notion that they are leeching off the economy, there’s also the notion that they are ungrateful and reject the very state that financially supports their spiritual efforts, which in itself isn’t directly quantifiable. They also see the language, mannerisms (or lack thereof), code of dress, etc. as offensive. Therefore, why continue to put up with them when the economy is bad enough as it is, unemployment is at 40% thanks in huge part to them, and the median salary in Israel is about half that in the U.S./Canada while expenses are more or less the same? Let them contribute a little! This is the bottom line. 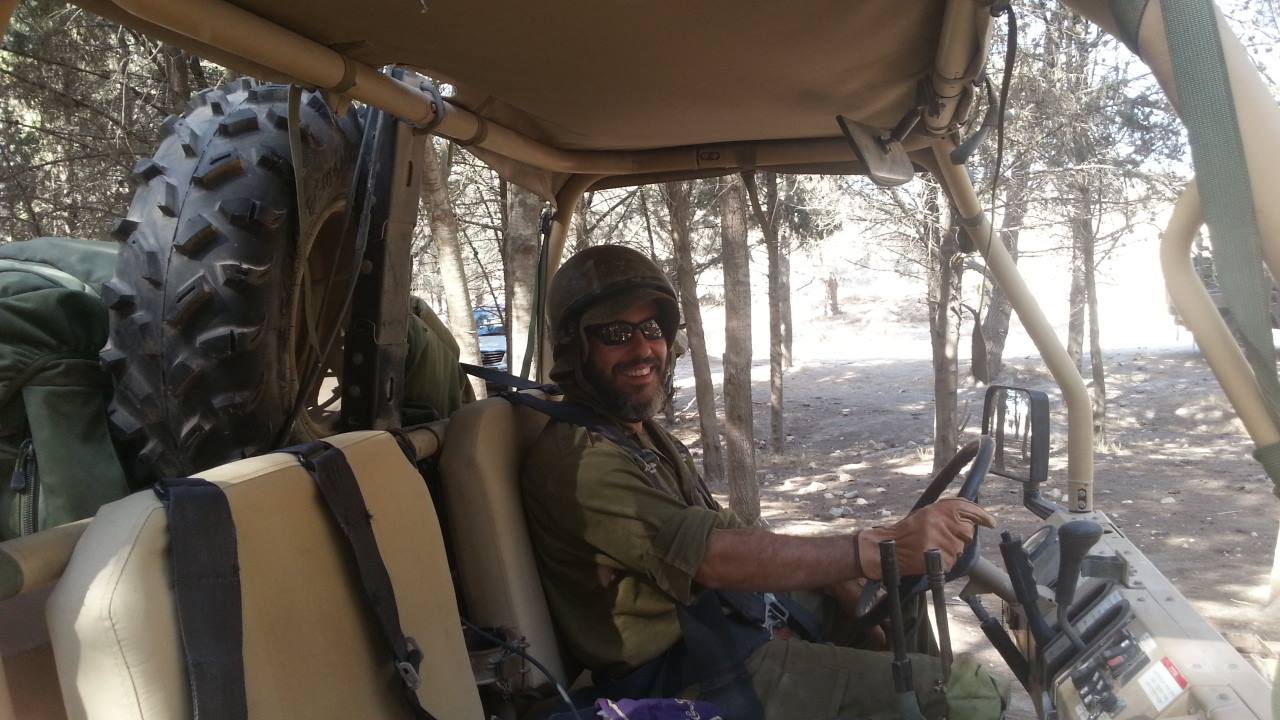 I believe that the two legs supporting Israel is in learning Torah as well as the army. There are many today that reject the State from an ideological level, since it was started by complete heretics. However, I believe that if you don’t support the mouth that feeds you, go somewhere else. We Jews need a state to survive. Baruch Hashem we don’t remember what it was like during the days of Pogroms where looting, pillaging and raping/killing young women were the norm and Jews felt hatred on a very tangible level. Now, the Arabs are also reproducing at a record rate. In order to keep up with them, Israel practically needs more soldiers, plain and simple. One cannot rely on miracles alone, in fact it’s forbidden to be Somech on a Neis (rely on a miracle). We need to do our Hishtadlut. The fact also is that many Haredim that honestly aren’t cut out for learning Torah 24/7 are an untapped resource that can be utilized in a very Kosher manner. There are also wonderful programs like Hesder Yeshivot which combine the two. While Hesder Yeshivot presents its own set of problems ( like not being able to learn after coming back from 1.5-2 years in the army, not really studying, use religion for personal gain), and that it’s hard, it’s doable.

Being that I’m not a Masmid and that most of my family in Israel serves/served in the army, it’s hard for me to be unbiased, but if I were to have grown up in Israel I would have probably served in the Israeli army myself with pride.

In past posts people have emailed me some interesting comments in a very negative way. I guess this is the Jewish way – to spit on others, calling them “stupid, unaware and naive” while building  themselves up to one-up another in a Gaavah competition is the greatest form of respect. I’m looking for intelligent dialogue here. I also understand that no comment is also a comment. If you have nothing constructive to say, please leave.

Also, I apologize if I don’t reply to comments right away. During the week while at work I have no time to reply to all emails. If an email comes in on Sunday I will try my best to reply on Sunday. Otherwise please expect comments to be replied to by the following weekend, Gd willing.

← Korach and Applied Skepticism
Women Of/Off the Wall – Some Facts →