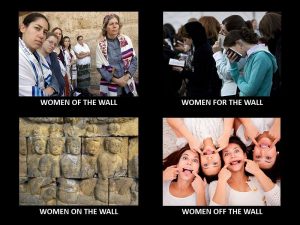 The Jewish media in general has seemed to give a lot of free press to a small group of Jewish feminist meshugennas called Women of the Wall. This is a group that is bent on disturbing long-accepted traditions and practices due a holy place such as the Western Wall, which being part of the outer wall Herod built, represents the last remaining vestige of our holy Temple from 2,000 years ago.

They have made it a point to congregate every Rosh Chodesh at the Kotel to spite people and get press.

In an attempt to circumvent such madness, here are some little known facts:

1. Most Israelis don’t care one iota about these women and their actions, most of whom are unattractive anyway. Israelis have many more important matters to worry about, such as putting food on the table and paying rent. Caring about them is a very Chutz La’aretz thing to do (source: actual relatives living in Israel)

2. The WOW was started by a specific woman that identifies with the Reform movement. This person has been trolling around for over 15 years and now she’s able to make noise (source: Jeff and the Rabbi).

3. These women are comprised of 10 crazies that are in reality drowned out by dozens of other women that are “for the wall.” The secular media goes into the crowd and hones in on these specific women as the secular Israeli media always has an agenda with regards to religious Jews.

4. Nowhere in the Torah does it say for anyone to wear Tefillin at the Kotel once a month. Tefillin are worn every day by those that commit to it, and many that visit the Kotel don’t even daven there. They daven in their cozy shul and visit the place later as the noise and lack of organizated Minyanim there can get distracting.

5. All this free press given to them is unjustified.