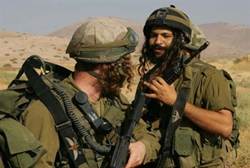 An American Jewish soldier stationed on the Austrian front lines in World War II, became known in his unit for uncommon bravery. On multiple occasions, he would go behind enemy lines at night, and each time return with a dozen or so prisoners, which he apparently captured single-handedly without a shot being fired. He refused to reveal his method for accomplishing this incredible feat, and his commanding officer respected his wishes for secrecy. Finally, after the war ended, the officer could no longer contain his curiosity and asked the soldier how he did it.

“Simple,” the man replied. “I would just sneak up within earshot of the front, and call out ‘Yidden! Ich darf ah minyan auf kaddish!’ [‘Jews! I need a minyan to say kaddish!’] and immediately, ten or twelve Jews would come over in response!”

Note: This joke was also used with the American Civil War 150 years ago, when Jews had direct relatives in both the north and south and spoke both English and Yiddish.