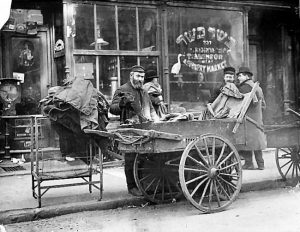 The (European) press began to busy itself with the problems of emigration. The Austrian Central Body of Jews, which arose in 1848, dedicated itself to this situation. In May of 1848 a Committee for the Promotion of Emigration was started.

At that time North America was home to a considerable number of immigrant communities from Central Europe, in particular from Posen [Translator’s note: today’s major western Polish city of Poźnan, at that time part of Greater Prussia], Bavaria, Württemburg, and the provinces of the Rhein River. J. J. Benjamin, to whom we owe so many lively descriptions of the history of the Jewish settlement of America, describes it in his somewhat stiff and wordy manner of presentation:

“Some of the previously-arrived Jews, whom the new arrivals worked for in their businesses, provided the strangers with advice and assistance, gave them credit and wares to sell, and advised them how to go about the country as peddlers, that is to say, from house-to-house. Such business in America is in no way disreputable; the Yankees had always operated like that, and farmers, who otherwise would find no opportunity to have such wares delivered to their door, treated such peddlers with hospitality and gladly paid favorable prices.”

Later he describes how these diligent peddlers acquired wagons and horses, and later advised relatives and friends how they too could come into money. And he relates how great enterprises in New York, Philadelphia, Baltimore, Cincinnati, St. Louis, Chicago, New Orleans, San Francisco, etc., were built up from such humble beginnings.

In his History of the Germans in America, Franz Löher stated that the number of German Jews in the United States and Canada was 50,000. As Löher told it, the great majority of these Jews resided in the large cities. This German writer observed that the Jews were regarded equally much as citizens as were the Christians.

Löher’s observations must be noted as excluding the number of Jews who worked the broad lands as farmers.

From the enduring picture of Jewish pioneering, we perceive that Jews contributed much to the opening up of the West. One could find them in border villages, in small settlements that were frequently overrun by Indians. They weren’t simple peddlers; they possessed courage and nerves.

In like manner did the pioneers operate in Iowa, Illinois, and the southern states. In Florida and Texas the Jews settled vast stretches of land. A. L. Lebeson didn’t exaggerate in his 1931 book Jewish Pioneers in America, when he wrote, “From Florida to New England, from the Atlantic Ocean to the Pacific, there were efficient, hard-working people who helped build America. Whether with backpacks or behind a team of oxen, the Jewish pioneer, just as did the Christian, performed services which conquered the wilds.”

After 1848, the character of the immigrants changed. Academics, writers, and artists came to the new land.

Jewish immigration spread forth from the 13 original states in the east in all directions. Around the year 1850 Jews were present in most of the eastern states: Delaware, Michigan, Ohio, Indiana, Kentucky, Tennessee, and Alabama, where organized pioneers had been since 1724; and Florida, Louisiana, Mississippi, Arkansas, Missouri, Iowa, and Minnesota were settled by Jews. Only in the eastern states of West Virginia, Vermont, Maine, and Wisconsin did settlement occur at later times.

The following western states also showed Jewish settlers: Texas (already since the beginning of the 19th Century), Kansas, Nebraska, Colorado, New Mexico, and the three states that lay on the Pacific coast, Washington, Oregon, and California. In those latter three states, settlement began after the discovery of gold in 1848. There were Jews who had ownership in the first 40 mines. In 1849 the first Jewish community in San Francisco was founded. In the remaining western states – Oklahoma, South Dakota, North Dakota, Montana, Idaho, Utah, Nevada, Wyoming, and Arizona – the process of immigration was slower and took place later, either in the final decade of the 19th century or the first decade of the 20th.

The massive Jewish immigration from eastern Europe occurred during that period. Even as early as 1825 the B’nai Jeshurun community in New York counted Polish Jews as members, and in 1852 a small synagogue for Russian Jews was founded, though the great immigration from Russia didn’t commence until 1881. From 1881-1899 alone about 1,038,000 Jews immigrated; in the following three decades, from 1900-1930, about 1,866,000 Jews came. The fraction of Jews in the total immigration into the United States was around 10 percent. As opposed to this, the number of Jews who returned to Europe was tiny, about 54,000 from 1908-1929. [One wonders if this number reflects those immigrants who were denied entry at Ellis Island for reasons of health.]