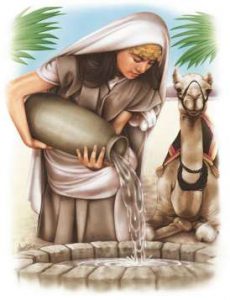 Questions are from the Country Yossi Show:

Question: When Avraham sent Eliezer to find a wife from Avraham’s family for his son Yitzchak, Eliezer needed to stop at a well and pray to Gd to show him a sign by the right girl saying “drink, and I will give your camels to drink.” Why couldn’t he just knock on Besuel’s door and ask for Rivka? Avoid the drama.

In comparison, right before Yaakov fled from Eisav, the same Rivka told Yaakov to go straight to her brother Lavan’s house and while there was a 16 year wait, Yaakov went straight to Rivka and kissed her in public. Notwithstanding the kissing part, why didn’t Yaakov also ask for a sign and do the whole charade that Eliezer was forced to do?

1. Avraham lived in Terach’s house and was away for 65 years. Avraham knew that just like he went one path, he had no idea how his family fared. Keep in mind that communication back then wasn’t like it is today. Therefore, Eliezer needed a sign to verify that Avraham’s family still had the common trait of treating guests with respect.

2. Eliezer wasn’t blood related, so it was harder for him to identify with Avraham’s own blood. Yaakov was, in comparison, blood-related, therefore no tests were needed.

3. Rivka was the difference maker here. When Avraham/Avram left his family, he snuck out the back door with his cousin/wife Sarai. According to Midrash Avraham’s family was plotting to kill him for his monotheistic beliefs. In other words, Avraham left on bad terms where he couldn’t trust his family. Rivka, however, left on great terms as she was about to get married to a great man! The terms each person left under defined how each one could trust their respective families.

4. Now for a more kooky mystical one: According to R’ Chaim Vital, Yitzchak was living with a female soul (nekaiva neshama) inside him. Therefore, he wasn’t able to have any children and continue Avraham’s legacy. The Akeidah episode caused Avraham to cut Yitzchak’s food-pipe-part of the neck but not his wind pipe. The sight of blood literally scared Yitzchak to death and caused the female soul to leave him and enter Rivka, who was just born then and there, enabling a brand-new male soul to enter his body. This made it all possible for Yitzchak to have children later on.

(On a side note, some say that Rivka was 3 when she got married to Yitzchak and some say she was 14, which sounds more plausible. I’d like to think that perhaps the same thing happened to Rivka – an 11 year old girl fell down a well, died, and “miraculously” survived by means of Yitzchak’s female soul. That way she would be both 3 and 14 at the same time. – Rafi’s interpretation)

Now for my own stuff on R’ Chaim Vital’s claim.  Since a soul picks up Mitzvos and traits while in a live body, Eliezer was looking for the defining characteristic of Avraham and Yitzchak – the trait of charity. This was a trait that no girl in Canaan naturally had, and the only one who could have that was someone that grew up in Avraham’s household. That’s why Eliezer needed such a sign. Just like Avraham went to great lengths to ensure that each guest was happy, Rivka/old Yitzchak exhibited that trait by serving water to Eliezer as well as to each individual camel. When Rivka exhibited that trait, it was practically a “done deal.”

In comparison, Yaakov wasn’t looking for any soul that was previously inside his body. He was looking to run away, learn Torah, give sacrifices, and get married “normally.” Therefore, there wasn’t any need for such drama.