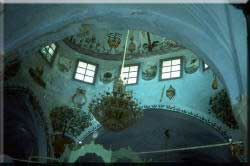 Rabbi Yosef Karo was born in Toledo, Spain in the year 1488. In the year 1492, when he was only four years old he was forced to flee Spain with his family and the many other thousands of Jews that were forcibly being expelled from their homes where they had lived for many hundreds of years.

After wandering from place to place, they finally settled in Consatantinople, Turkey. As a child he was taught by his great father Rebbe Efraim ben Yosef Karo, and when his father passed away he was taught by his uncle, Rebbe Yitzchok Karo, who cared for him like his own son.

Already as a young man, he gained a reputation as a brilliant Torah scholar. He began by writing an explanation on the Rambam’s Mishnah Torah. He called his work the Kesef Mishnah. Here he showed and explained the Rambam’s sources, since the Rambam only brought down the halachos, leaving out this most important bit of information.

At the age of 25, while living in Adrianople he began writing his next sefer called the Bais Yosef which was based on the works of Rebbe Yaakov ben Asher (the son of the Rosh) who had written a work on halachah called the Arbah Turim. The Tur is divided into four separate volumes. The first volume is called Orach Chaim containing the laws for daily living, such as the laws of tefillah, berochos, tefillin, tzitzis, shabbos, yomim tovim, etc. The second volume is called Yoreh Deah which contains the laws of kashrus, shechita, milk and meat, salting of meat, idolatry, ritual purity, Torah scrolls, etc. The third volume is called Even Ha’Ezer and contains the laws of marriages , divorce, domestic relations, etc.. The fourth volume is called Choshen Mishpat and contains the laws of witnesses, judges, property, sales, inheritance, damages, etc. Rabbi Yosef Karo now began to show where these laws had been taken from. He starts by quoting the gemorah and continues to show how the many early commentaries understood it. He does a magnificent job of collecting the various different opinions in a clear and concise manner so that one clearly understands the many different facets of the halachah and on what it is founded. This work took him twenty years to complete and is still studied nowadays by those who want to know the source and various opinions of the early commentators-the Rishonim.

But for the average person, this was far too much. What was needed was a concise clear and simple sefer from which even the unlearned could study and know the law. And so, years later (after having moved to Tzfas) he went about writing a concise abridged sefer giving only the law itself without citing the many different opinions or any of the sources. This he called the Shulchan Aruch which translates as the “Prepared Table” where all the laws are clearly set up in front of you in simple and clear fashion. In deciding the law, he based his opinion on three great halachic giants before him. They were the Rambam (Rabbi Moshe ben Maimon), Rif (Rabbi Yitzchok Alfasi) and the Rosh (Rabbi Asher ben Yechiel) who had all written works on halachah. When they argued against each other , for the most part he would follow the majority opinion. Since many laws are based on the prevailing custom of the land, he of course, gave the greater weight to the Sefardi customs.

Rabbi Moshe Isserlis ( the Ramoh 1520-1572) who was known as one of the greatest poskim of all time and lived in Krakow, Poland, thereupon wrote his own commentary in which he argues with some of the halachos . These were added to both the Bais Yosef and the Shulchan Aruch and gave the psak halacha which the people in his countries were to follow. While the Ramoh disagrees with the Shulchan Aruch of Rabbi Karo many a time, he speaks of him with the greatest respect. And so the Shulchan Aruch could now be used by everyone, both Sefardim and Ashkenazim and is still used to the present day. Over the generations many additional commentaries were, of course, added, and the Shulchan Aruch grew thicker and thicker.

While Rabbi Yosef Karo wandered from city to city never finding proper peace of mind, he finally began his travel to Eretz Yisroel. Passing Salonika and Egypt, he finally reached Eretz Yisroel and made his home in the city of Tzfas (1536) which contained the major Jewish settlement and Torah center during those years. Many great Torah giants lived in this city in those days. It was here that he first met the great leader Rabbi Yaakov bei Rav.

For many centuries, rabbinical ordination-semicha- had been passed on from rebbe to student going back in an unbroken chain to Moshe Rabbeinu. Yet this chain was broken during the fifth century when the Sanhedrin fell apart because of the terrible decrees against the Jews. The Rambam says that this practice can be reinstated only by convening all of the greatest Jewish sages in Eretz Yisroel, and then proclaiming their rabbinical leaders. Rabbi Yaakov bei Rav tried very hard to reinstate the practice of having one great Jewish body known as the Sanhedrin, that would once again have the same powers of old. He felt that it was very important that there be one body that would decide halachah for Klal Yisroel, rather than have every rebbe making his own decision on major matters. He succeeded in convening a great assembly of chachomim in Tzfas who appointed him as their leader. He later conferred this special semicha on Rabbi Yosef Karo and Rabbi Moshe ben Yosef d’Trani -the Mabit, Rabbi Moshe Cordovero- the Ramak, and Rabbi Yosef Sagis, but he soon received major opposition to this idea from Rabbi Levi B. Chaviv and the Chachmei Yerushalayim and eventually had to abandon it.

When his Rebbe passed away, he took over as the head of the Bais Din. He also stood at the head of a yeshivah which he had established. Many great Torah personalities such as Rabbi Moshe Cordovaro (a famed mekubal known as the Ramak), Rabbi Moshe Galanti, and Rabbi Moshe Alshich (a famed darshen who wrote a commentary on the Chumash and Nach) were among his students. Rabbi Shlomo Alkabitz who was also a great mekubal, well known as the author of the Lecho Dodi we sing each Friday night (as well as the author of many seforim), was one of his closest friends.

When a terrible death plague broke out in the city of Tzfas, he left for the nearby village of Birya where he remained until the death plague subsided.

The city of Tzfas was the only one in the country that had a printing press, and it was the printed word that made it possible for the world to learn about his great work . The first printing of the Shulchan Aruch was in the year 1565, and it has been reprinted many hundreds of times since then, each one with additional comments by later scholars put into the margin around its side. His fame quickly spread far and wide and thousands of people from around the world would write to him, seeking his opinion on Jewish law.

At first, there were many scholars that opposed his work, just like there had been much opposition to the works of the Rambam. They felt that people would now take a short cut and neglect the study of the Talmud. Time, of course, proved them wrong. The Talmud still remains the primary sefer of study.

Besides being a master of halachah, he was also well versed in the secrets of Kabbalah for which the city of Tzfas was noted for. For here lived the holy Ari Ha’kodosh and some of the greatest masters of Kabbalah in the world. 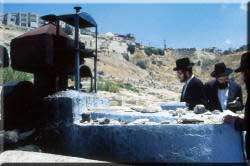 Rabbi Yosef Karo put much emphasis on the study of Mishnah which was constantly on his lips. In his sefer called the Maggid Maishorim he tells about a strange voice that would constantly come and speak to him. He refers to the voice as “the Mishnah” and sometimes as the “Maggid”, and he records many of the things that this angel told him. Sometimes he would chastise him for things he had done wrong and other times he would lavishly praise him for the good things he did and advise him on how to improve himself. Here is just a sample quote; “..The Rambam is very happy with you for you have been able to understand and uncover his deep meanings. He is also very pleased that you mention his opinion all the time. One should realize that nearly all he (the Rambam) says is true.”

While he wrote many more seforim, none received the fame of the Shulchan Aruch.

Rabbi Yosef Karo passed away on the thirteenth day of Nissan in the year 1575 at the ripe old age of 87 and lies buried in the Tzfas cemetery amongst the many other great tzadikim.