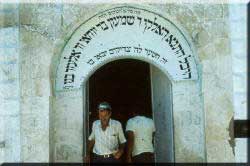 The name Rebbi Shimon can be found practically on every page throughout the entire Talmud. Whenever it mentions the name Rebbi Shimon without giving us the name of his father, it usually refers to none other than the great Tanna Rebbi Shimon bar Yochai who was born just before the destruction of the Bais Ha’Mikdosh . For more than thirteen years he studied under Rebbi Akiva, whose twenty four thousand students died in a terrible plague during the days between Pesach and Shavuos. It was then that Rebbi Akiva taught the Torah to Rebbi Meir, Rebbi Yehudah, Rebbi Yossi, Rebbi Shimon and to his son Rebbi Elozor. Even when his Rebbi was locked up in prison, Rebbi Shimon followed him there to learn Torah.

Actually, Rebbi Shimon received his semicha from the great Rebbi Yehudah ben Bava who, despite the Roman decree which did not allow rabbinical ordination, sacrificed his life to ordain these great Torah giants. While Rebbi Yehudah ben Bovo was riddled to death by more than three hundred arrows, the others all managed to escape. And so the entire oral Torah that they now taught to all oncoming generations was all handed down to them by their great teacher Rebbi Akiva.

His most famous work is the Zohar Ha’kodosh (also known by the name Medrash Yehi Or), a sefer dealing with the deep mystical secrets of kabbalah. Those who study these works are referred to as the Yodei Che’n which is an abbreviation for Chochmo Nistoroh -(the hidden wisdom). This sefer remained hidden for many years and was first made public by Rebbi Moshe de Leon who published it more than a thousand years later.

He was on the Roman government’s “most wanted list” because of some of his disparaging remarks made about the Roman Empire. The story goes as follows; (see mesechta Shabbos 33)

The three great sages Rebbi Yehudah, Rebbi Yossi and Rebbi Shimon were once engrossed in a heated debate. While Rebbi Yehudah credited the Romans for their great achievements in building roads, bridges and bath-houses, Rebbi Shimon countered that this was done only for their own self interests and certainly was not done with the Jews in mind. The bath houses were built for their own enjoyment and the bridges were built to collect taxes so they could fill their own coffers. Rebbi Yossi sat silently, listening to the debate but not offering any comment of his own.

A man by the name of Yehuda ben Geirim who sat nearby and heard the entire discussion, repeated these comments and the word soon spread until it reached the ears of the Roman authorities who weren’t great believers in “freedom of speech.” Rebbi Shimon’s remarks were considered outright incitement and treason, and he was immediately condemned to death. Rebbi Yossi was condemned to be exiled to Zippori for his silence and lack of defense for the holy Roman Empire. Rebbi Yehudah was rewarded by being made the speaker of the house for his favorable remarks.

Luckily, Rebbi Shimon was forewarned that the soldiers where on their way to arrest him, so he quickly hid in the shul’s attic. He stayed hidden there with his son while the police continued their search in vain. Each day his wife would come and bring them food. As the search for him intensified, he was afraid that they would torture his wife in order to discover his secret hiding place. He left in the middle of the night and hid in a cave in the wilderness. A miracle occurred and a carob tree suddenly appeared and a spring of water burst forth nearby. All day they would learn Torah together uninterrupted by any disturbances. They only wore their clothes during davening and covered their bodies in sand during learning in order to conserve them . After having spent twelve years learning Torah constantly, Eliyahu Hanovi appeared at the entrance of the cave and notified them that the Roman Emperor had died and therefore all prisoners were granted an automatic pardon to return home. As they began their walk back into town, they noticed a farmer plowing and planting a field. “Why is he wasting his precious time preparing for his needs for this world when he ought to spend his valuable time making preparations for the world to come,” he wondered. He looked at him with his penetrating holy eyes and the man immediately turned into a heap of bones. Thereupon a heavenly voice called out . “Do you want to destroy my world? Go back to the cave. The world is unable to exist with your great holiness.” They spent one more year in the cave totally immersed in Torah. After a year they began their journey back to civilization. On the way he saw a Jew carrying two bundles of myrtles. When he questioned him as to their purpose , the man replied that they were for the holy Shabbos. One was in honor of the word shomor (keep), while the other was in honor of the word zochor (remember).

There was great elation in town when the people saw their great Rebbi return. When Rebbi Pinchos Ben Yoir saw Rebbi Shimon’s badly scarred body caused by his many years of immersion in the sand , he immediately took him to the bath house and began to wash him . As Rabbi Pinchos’ salty tears fell upon his body adding to Rebbi Shimon’s pain, Rebbi Pinchos cried out ” Woe be it to me that I see you in such a terrible state”. Whereupon Rebbi Shimon immediately replied, ” If I had not been in this state, then I certainly would not have been able to achieve the high level of learning that I was able to reach.”

In order to celebrate this great miracle, he offered to do a good deed for the towns’ people. There was a road under which there had been a lost grave and therefore the kohanim had to take a long detour in order to cross over to the other side. The holy Rabbi Shimon was immediately able to discover the unknown burial place and the problem was corrected.

After leaving the cave, he established a yeshivah in Tekoa where he was surrounded by many of the great leaders of the generation, amongst whom was none other then Rabbeinu Hakodosh. .

While Rebbi Yishmael taught that a person must live a normal life by plowing , planting and reaping, Rebbi Shimon preached that one had the right to totally immerse himself in Torah and have complete faith and trust that Hashem would take care of his needs. While some tried to emulate his ways and were successful, most others tried but failed. Obviously they were unable to reach his great degree of love, fear and faith in Hashem, for he never wasted a moment. He learned non-stop, not even stopping to pray. Yet he warned others that could not reach this uninterrupted state of concentration to be extremely careful to pray properly. (see Shabbos 11 and Berochos 7:)

And so, these two different outlooks on life have remained with us until the present day. Certainly one must conduct his life with great holiness , trust and faith in order to be zoche that “his work will be done by others”. The ordinary person will have great difficulty to reach this high plateau.

As he was once in midst of teaching, a former student returned from a very successful business trip having amassed lots of wealth. He noticed that some of his students were getting a little edgy and were considering leaving the life of Torah and going out to seek their fortune as well . He thereupon called out “Valley, Valley , I command that you fill up with gold coins”, whereupon the entire valley suddenly sparkled with gold coins. He now turned to his students and told them that they could take all the gold they wanted to. “But remember” he warned them. “It will all be deducted from your share in the world to come.” Not a single student moved from his place. He had made his point loud and clear!

“One must never partake of a meal that is not a seudas mitzvah,” was another one of his teachings. (Pesochim 49). “The death plague of askarah comes on account of bittul Torah-time wasted from Torah. (Shabbos 33:)

When his students asked him , “Why didn’t Hashem grant the miracle of mon (the heavenly bread) just once and let it suffice for all forty years?,” he answered that Hashem wanted them to concentrate their hearts and look up to Him every single day (Yumoh 76). He put great stress on the important quality of yiras shomayim – fear of Heaven. (Berochos 33:)

If only all Jews would keep two consecutive Shabbosos then the Moshiach would come at once, he said.

He taught his students that it is far better to throw oneself into a fire rather than shame someone in public.

He would always try to find and darshen the reason and logic behind every verse, even when the posuk did not state any reason.

Miracles always seemed to be happening to him. And so it was when the Roman Emperor Antuninus proclaimed some terrible decrees against the Jews, it was he that was chosen to go to Rome to try and get them rescinded. Sure enough, when he arrived in Rome, the emperor’s daughter became very sick and he was miraculously able to cure her. As an expression of thanks, the emperor tore up the decrees.

While many of the sages believed that the day would come when the Torah will be forgotten, he believed that this would never happen since the posuk promises “that it will never be forgotten from your children and children’s children.” In fact, you will find this very posuk engraved upon the stone archway that leads into his cave.

He was buried in the city of Meron just to the side of his great son Rebbi Elozer (bar Rebbi Shimon).

On the thirty-third day of the Omer, the day of his passing, thousands upon thousands of people flock to his holy gravesite in Meron where they sing, dance and study his holy writings.