The ancient walled city of Acco, also called Acre, is rich in history. It is located in the portion of land belonging to the Shevet of Asher (Jud. 1:31) Acco is located in the northwestern part of the country, on the eastern shore of the Meditereanan Sea. The city projects out into the sea and is surrounded by water on three sides. 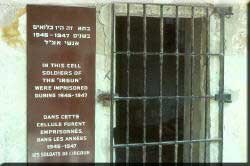 The Medrash tells us that in the days of Enosh there were two great floods. As the waters of the first flood approached the city of Acco, Hashem said- “Ahd ko!,” until here and no more. “Ahd ko” was shortened to the name, Ahko, or Acco. (Med. Rab. Bereishis 23:7)

To yeshiva bochrim, the city of Acco is well known from the first Mishna in Gittin. Acco is mentioned in connection with the halachos of “gittin” as the northernmost city in Eretz Yisroel. But, Acco is more famous than that. It is one of the oldest continuously inhabited cities in the whole world. The city is mentioned in ancient Egyptian hieroglyphics dating back 3,500 years.

In ancient times, all ships that arrived in Eretz Yisroel from abroad would dock at the port of Acco. There is a famous story recorded in the Gemarah about a miracle that occurred in this very port: 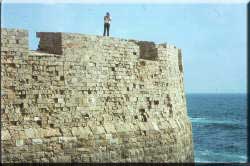 A wealthy man named Nicanor had two great bronze doors made in Alexandria, Egypt for the second Bais HaMikdash. Nicanor went to Alexandria to bring his doors back to Eretz Yisroel by ship. On the way, a great storm broke out and threaten to sink the ship with its precious cargo. The sailors threw one of the doors overboard so as to lighten the load, but the ship continued to flounder. They were ready to throw the other bronze door into the sea when Nicanor grabbed the door and yelled ‘Cast me in with it!’ Suddenly the storm stopped. But Nicanor was still deeply saddened by the loss of the other door. As the ship arrived in the harbor of Acco, the door that was tossed into the sea suddenly broke forth from the waters and floated to the ship.

All the doors in the Bais HaMikdash were plated with gold, except the two great Nicanor doors. The kohanim did not wish to hide from sight, even under a plating of gold, Nicanor’s two miracle doors. (Yoma 38a)

Another story that relates to the Bais HaMikdash occurred in Acco many years later. About 50 years after the churban Bais HaMikdash, the Roman Emperor Hadrian wanted to Jews to respect him. He gave them permission to rebuild the destroyed Bais HaMikdash. A great feast was held in Acco. Rabbi Yehoshua ben Chananiah presided over the festivities.

Meanwhile some of the evil Kussim (Samaritans) told the emperor that the Jews planned to use the Temple as a fortress and would rebel against Rome. Hadrian asked the Kussim what he should do since it would not be proper for him to revoke the grant to build the Bais HaMikdash. The Kussim suggested that he order the Jews to make the building larger than before or perhaps tell them to build it according to the proper measurements but in a different location. Since the Jews are not permitted to do either one of these, they would stop their plans immediately. Hadrian agreed to the plot of the Kussim.

While the celebration was going on in Acco, Roman messengers arrived and announced Hadrian’s new orders. The assembled Jews were greatly distressed and were ready to start an uprising against the Roman Emperor. Rebbe Yehoshua ben Chananiah addressed the crowd of Jews with the following story:

A lion killed an animal and immediately began to eat it. While eating the carcass, a bone became stuck in the lion’s throat. The lion was unable to cough it out. The lion announced than anyone who would remove the bone would be greatly rewarded. A heron flew to the lion and said that he could remove the bone with his long beak. The lion opened his mouth and the heron stuck in his head and removed the bone. When the heron asked for his reward the lion said now you can boast that your head was in the lion’s mouth and you came out alive. That shall be your reward.

Rebbe Yehoshua ben Chananiah turned to the assembled and said that we have had dealings with the cruel emperor, we too have had our heads in the emperor’s mouth and we too have come out alive. Let that alone be our reward. (Med. Rab. Bereishis 64:10)

Many of our great sages lived in Acco. Among them were Rabban Gamliel, Rabban Shimon ben Gamliel, Rebbe Yosi, Rebbe Yehudah, and Rebbe Abba.

Many famous non-Jews visited Acco. When Alexander the Great subdued the Middle East, he came to Acco and establish a mint for issuing coins. The Roman Emperor, Julius Caesar, visited the city during his reign and for many years all the documents written in Acco were dated from the year of Caesar’s visit. The famous Italian adventurer, Marco Polo, likewise visited the city. Napoleon desperately wanted to “visit” the city but was unable. But, that is a story that I shall tell short while.

Throughout history many battles were fought in and around Acco. When the Maccabees were fighting the Syrian-Greeks, many of their battles occurred in Acco. Yonason, one of the Maccabean sons of Yochanan Kohain Gadol, was killed in Acco.

The most intense period of warfare in Acco was during the 1200’s. The Christian Crusaders from England and France, the Mamalukes from Egypt, the Syrian Moslems, the Chinese Mongols all fought over Acco. But, for the most part of that century, the district was under Crusader control and it is the remains of Crusader fortresses and walls that remain there today. There is also a vast underground secret complex, first started in the 1100’s and completed by the Crusaders, that can also be visited.

By the end of the 1200’s, Acco was in the hands of the Moslems. In 1799, Napoleon of France was planning an invasion of Acco. The governor of Acco, fondly called Ahmed the “Butcher”, together with some British troops successfully defended the city against Napoleon’s forces. That ended Napoleon’s grand desire to conquer the world. As Napoleon left for home he said “Had Acco been mine, the world would have been mine.” If Napolean had been successful in “visiting” Acco, perhaps all of us today would be speaking French.

Acco today is a picturesque port, hosting mostly small fishing boats. The crusaders’ fortress and underground city are quite interesting. During the British mandate, many of the captured members of the Irgun, the Jewish underground, were held prisoner here.

← Praying at the Grave of a Tzadik
Israel Guide: Beit Lechem →