On the eastern shore of the Kinneret and continuing up into the north we have a mountainous region known as the Golan Heights. Its western border is the Yarden River and its southern border is the Yarmuk River. Brimming with flowing rivers, gushing waterfalls and bursting with beautiful blossoms, the Golan is filled with exquisite beauty. The rain and melted snow form glorious streams and rivers that run down into the Yarden and the Kinneret. 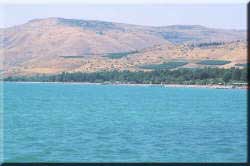 This area is, of course, not part of the Biblical borders of Eretz Yisroel and is considered “Ever Ha’Yarden” (the other side of the Jordan). It was once called the Bashan and was inhabited by mighty nations ruled by Kings Sichon and Og whom Moshe and the Bnei Yisroel destroyed before entering into Eretz Yisroel. The northern part of it was given to Shevet Menashe while Shevet Reuven and Gad, resided farther south (in the area across the Kinneret and the upper and lower part of the Yarden).

During World War 1, England conquered the Golan from the Turks and it became part of Syria when it became an independent country in 1945. Up until 1967, the Syrians controlled this entire area and it was here where they set up their military bases and fortifications. From here they would shoot at the Israeli kibbutzim and at Israeli fishing boats down below. The Israelis suffered greatly during that period and it was only on the fourth day of the Six Day War (June 1967), that Israel was able to capture these heights from the Syrians and put a stop to all the constant shelling. Jewish settlement was renewed and many beautiful villages were built here. Most are involved in agriculture, dairy farming, industry and raising livestock. 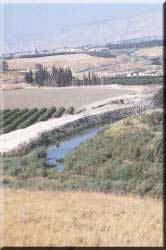 During the first days of the Yom Kippur War (August 1973), the Syrians captured most of it back and it was only toward the last days of the war that the Israeli army made a miraculous comeback and was able to push them back.

While the Syrians all fled, the only ones that remained behind were the Druze who continue to live in four villages (Ein Kinya, Majel Shams, Bukata and Mas’ada) within the Golan and the Chermon regions. Most Druze in the Golan are small landowners and engage in agriculture, with apples the dominant crop. They also engage in raising goats, sheep and cows. 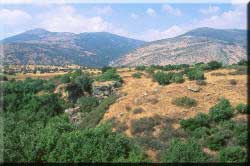 Archeological digs have uncovered Canaanite, Roman, Byzantine, Crusader and Mameluke remains of all sorts. Some shuls dating back thousands of years have also been discovered here. It is here that Moshe established a town named Golan as one of the Orei Miklot-a city of refuge for those that killed someone inadvertently.

The Golan has some very impressive waterfalls that you will surely enjoy visiting. That’s of course, if you are still young and don’t mind hiking a bit.