The Ari Ha’kodosh, Rabbeinu Yitzchok Luria, was born in the year 1534 in the old city of Yerushalayim. The name Ari is an acronym for Eloki Rabbi Yitzchak. Others say it stood for Lion, for he was the lion of his generation. 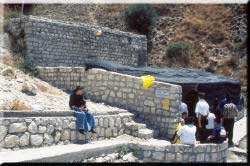 He lost his father at a very young age and his mother was forced to move with the family to Egypt where their rich uncle Rebbi Moshe Francis supported the family and took care of all their needs as a truly devoted father. If fact, at the age of 15, the Ari married his uncle’s daughter-his cousin.

He learned in the Yeshivah of Rebbi David ibn Zimra (the Radbaz), a great and noted scholar whose more than three thousand halachic responsa have been published. His Rebbi was Rebbi Betzalel Ashkenazi, the author of the well known Shita Mekubetzes. He spent much of his time secluded in a small house along the Nile river where he studied uninterruptedly. Here Eliyahu Ha’navi would appear to him and teach him the secrets of the Torah known as Sod or Kabbalah. He once told his students that it would take him eighty years to teach them what he was able to learn in just one night. 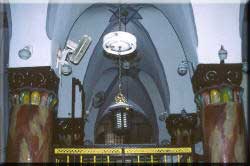 It was Eliyahu Ha’novi that told him to return to the city of Tzfas in Eretz Yisroel where he would meet Rebbi Chaim Vital, to whom he was to reveal these secret teachings. And so, in 1570 at the young age of 36, only two and a half years before his death, he settled in the city of Tzfas, known as the center of Torah during those times. There lived the great mekubal Rebbi Moshe Cordovero, known as the Ramak- the author of Pardes Rimonim and Or Yakar, kabbalistic works on the Zohar. 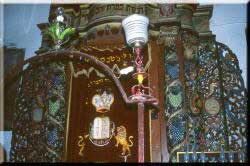 Although the Ramak died at the age of 48, just a half year after the Ari’s arrival, the Ari referred to him as Moreinu-our teacher. Yet there are some major differences in the way the Ramak understood certain difficult concepts in Kabbalah and the way the Ari explained them. In time it was the Ari’s approach that was accepted amongst those who study its hidden secrets, called the Yodei Che’N (an acronym for Chochmo Nistarah-the hidden wisdom).

Even though the Ari was so young-just 36 years old-he was head and shoulder above all the rest, even those much older than him. His holiness and great grasp of both niglah (the revealed Torah) and nistar (the hidden Torah) was apparent to all. There was no area in Torah that eluded him. Even the great and mighty came to drink from his waters, begging to be admitted to his inner circle of students.

Yet the Ari himself never wrote down any of his kabbalistic teachings. The only writings that we have from him are some piyutim and some of the beautiful zemiros, such as a’zameir bishvochin, a’sader lesudosei and benei heicholei, which we sing each Shabbos. Nearly all we know today has been recorded by the Ari’s prize pupil, Rabbi Chaim Vital. And one must remember that all this was done in the short span of only two and a half years, for the Ari passed away at the young age of 38.

To truly appreciate just a bit of the Ari’s greatness, one must read some of the things Rebbi Chaim Vital says about him.

“My Rebbi could look at a person’s face and know at once all that transpired during his lifetime”, is just one of his many observations. “Many times people would come to him and ask him to look at their foreheads and tell them if they had any sins for which they had to do teshuvah.”

During his sleep, his neshomah would enter into the upper worlds and the great sages of the past would reveal their secrets to him.

During the day he would sometimes take his students out into the nearby fields and point out to them the exact places where many great tzadikim lie buried. He was able to see and even communicate with the souls of these tzadikim. “He was even greater than a heavenly angel”, says Rebbi Chaim Vital who has recorded some wondrous stories about his Rebbi.

Sometimes, when a departed spirit would posses a human body causing great harm and pain, the Ari would send his faithful student Rebbi Chaim to remove the spirit . The Ari taught him the secret methods he used to force the sheidim and spirits to leave the body.

Every Friday evening the Ari would walk with his students to a spot overlooking the hills of Tzfas and greet the Shabbos queen. It is on this very spot where the Ari’s Sefardic shul stands. It is one of the largest and most magnificent shuls and was known as the Eliyahu Ha’novi shul because this is the place where Eliyahu would reveal himself to the Ari. A little further up the hill (on Najae St.) there is another shul known as the Ashkenazi shul, the place where the Ari learned and davened. (It was these shuls that protected the besieged Jews of Tzfas during the 1948 Arab riots.)

These shuls are not the original ones but have been rebuilt in their former places. That’s because they were all destroyed by a series of earthquakes (in the year 1759 and 1837) that destroyed most of the city’s ancient buildings and caused much death and suffering.

The Ari Hakodosh passed away in Tzfas in the year 1572 at the young age of 38, and was buried on the mountain side. Yet even the stone that marks his grave-site is not the original one, but was put up years later.

His famous mikvah, in which he would immerse himself many times a day, stands right over the top of the cemetery and is fed by a small spring coming out at its side. Tradition has it that anyone that immerses himself into this mikvah will surely do teshuvah before he dies. And so, to this very day, people come from everywhere to dip themselves into its ice cold waters. May his great z’chus stand in our merit.