Right near the Dead Sea is the beautiful oasis of Ein Gedi, mentioned in Shir Ha’Shirim. This is the place where Dovid Ha’melech hid from Shaul Ha’melech.King Shaul along with an army of 3,000 men gave chase to Dovid, who was hiding in the caves of Ein Gedi. 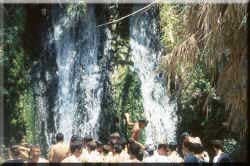 Here one sees large boulders and caves where antelopes roam. The area is filled with gushing falls and dense growth with many caves in which one can easily hide without being discovered. As Shaul entered into one of these caves, he didn’t realize that Dovid and his men were hiding at the other end of this very cave and could easily have killed him. However, despite the opportunity to kill Shaul, Dovid would not dare harm Hashem’s anointed. Instead, he cut off the edge of the king’s garment as proof that he had absolutely no intention of harming him. 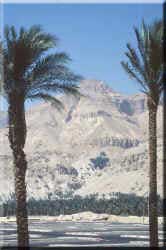 Alongside the Yam Ha’melech one also sees tall mountains with many caves in which Jews hid during Roman times. It was in one of these caves, called the Kumran Caves, where the Dead Sea Scrolls were found. These are on display in the Israel museum (in Yerushalayim) in the building called The Shrine of the Book.