On the north-western outskirts of Yerushalayim lies the kever of the famous Shmuel HaNavi. For thousands of years, Jews have been coming to pray and study at this holy site. Shmuel passed away on the 28th day of Iyar at the young age of 52. For hundreds of years this site belonged to the Jews who built upon it a shul and yeshiva. As usual, the Arabs chased the Jews away and took the place over. It is only now that a yeshiva has been re-established on this holy site. 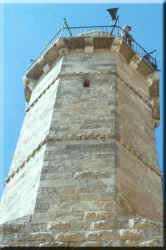 Because of its strategic location, overlooking the Tel Aviv-Yerushalayim road and the city of Yerushalayim itself, the Arabs built a military fortification here and used it during the ’67 war in order to shell the Israeli forces and the passing traffic on the road leading into the city. It was recaptured by the Israeli forces during the first few days of the ’67 war.

One can climb to the very top of the tall tower and get a beautiful view of the entire countryside. To get to the actual kever, one goes down a narrow staircase. There one sees the kever of Shmuel and alongside it rests his father Elkana and his mother Chana. 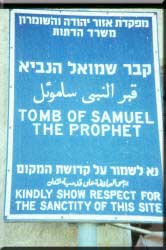 Elkana had two wives, Peninah and Chana. Penina had eight children while Chana was childless. As she was once in the Mishkan silently beseeching Hashem to give her a child, Eli the Kohen Gadol mistook her as being drunk. When he realized his terrible mistake, he blessed her that she would beget a son the next year.

Chana called her miracle child Shmuel, (a contraction of Shmah-kayl) meaning that Hashem had heard her prayers, and dedicated him to lead a life immersed in the service of Hashem as she had promised in her prayers. In fact, many of the laws of prayer are derived from the manner in which the posuk describes the way Chana prayed.

Shmuel spent all his time immersed in Torah study and prayer. It was only towards the last ten to thirteen years of his life that he served his nation in the capacity of judge, and navi.

He nearly lost his life when he mistakenly decided a halachah in front of his Rebbe, Eli HaKohen. This was when he said that it was permitted for a non-Kohen (a zor) to shecht a korban. Such disrespect for a rebbe is punished by a heavenly death penalty. (Perhaps this ought to teach us a lesson of how one must behave in the presence of one’s Rebbe). It was only after his mother pleaded with Eli Hakohen to forgive him and pray that he not be punished, that the heavenly decree was rescinded.

As a judge he made it his business never to remain in one place, but continually traveled around the entire country to administer justice. Never would he ever accept payment from anyone. As all other prophets, he was a wealthy man. He always carried around his own tent and other supplies of food and clothing where ever he went, for he refused to accept even the smallest gift from anyone.

When the Jews came to him and demanded that he appoint a king over them “like all other nations”, he was very extremely upset. While the request for a king was a legitimate one, the reason some of them gave “that he be a king like all other nations” was unacceptable. Although he strongly admonished them for the way they made their request, he went along with the idea.

Upon Hashems’ directive, he then went about anointing Shaul as King. When Shaul HaMelech later sinned by not completely fulfilling Hashem’s commandment to wipe out all of Amalek to the very last man, Hashem told him to take away Shaul’s kingdom and give it to Dovid instead.

The night that Dovid fled from Shaul, Shmuel taught him the entire procedure of how to build the Bais HaMikdash.

Shmuel was the author of sefer Shoftim, Rus and most of his own sefer which was later completed by Gad Ha’chozeh and Nassan HaNavi.

He passed away at the young age of 52, (four months before Shaul HaMelech) and was buried in Romo. Immediately after his passing, the city of Nov was destroyed and the mishkan was set a up in Giv’on (Zevochim 118).